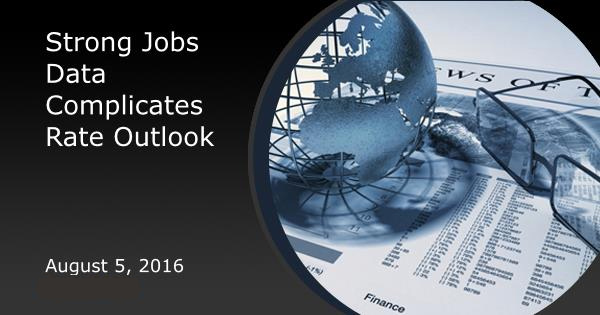 The month of July saw rates bounce up from all-time lows immediately following a strong jobs report. Rates managed to hold sideways during the 2nd half of July as investors waited for announcements from central banks, among other things.

Whether we're talking about the mighty Federal Reserve, the Bank of Japan, or the Bank of England, central banks around the world have a major effect on financial markets.  Interest rates weathered the storm of central bank announcements quite well, avoiding a break above those 'sideways' levels from July.

But the policy statement from the Federal Reserve left the door open for economic data to influence the rate hike outlook over the next few months.  In other words, if certain key pieces of data came out stronger than expected, the Fed would be increasingly likely to hike rates.

That's exactly what happened with this week's jobs report.  It was an important victory for labor markets because it confirmed a bounce back from the scariest slide in job creation of the entire recovery (seen in the June 3rd jobs report). 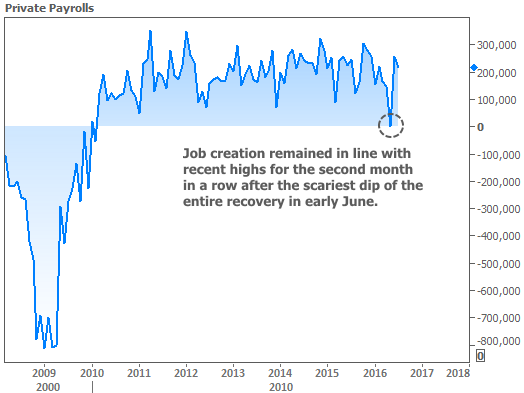 Unfortunately, the bigger the victory, the greater the effect on the Fed rate hike outlook.  Although the Fed Funds Rate doesn't directly control mortgage rates, when expectations increase for a Fed rate hike, longer-term rates (like mortgages and 10yr Treasury yields) tend to increase as well.  That's what happened in early July and that's what's happening again at the end of this week.

Following Friday's jobs report, the probabilities for a Fed rate hike in September doubled, albeit only from 9 to 18 percent.  The December likelihood leapt 10 percentage points to just under 40 percent.  Treasuries and mortgage rates increased quickly, leaving us to wonder if this is just the beginning of a more serious push back against July's all-time lows.

The following chart shows how rates were initially coaxed out of 2016's consolidative trend by the weak jobs report in June, as well as Brexit.  From there, you can see how the strong jobs data in early July began the push back against the lows. 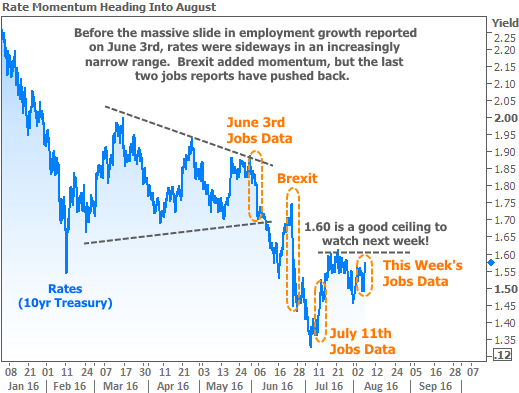 Now that we have a 2nd consecutive jobs report coming in so strong, the question is: will the upward momentum in rates be that much stronger?  In considering that possibility, it will be useful to keep an eye on the low 1.6% range in 10yr Treasury yields, as that has been an important ceiling recently.  When rates continually bounce against such ceilings, it's the market's way of letting us know it would be important if the ceiling ends up being broken.

Black Knight discussed the "Brexit Effect" on refinance demand.  It should be fairly clear from this week's charts that Brexit juiced rates, resulting in a logical spike in refi demand.  No major news there, if you've been reading my newsletters.

Slightly more newsworthy is the ongoing cooling in home price appreciation reported by CoreLogic.  This doesn't mean prices are falling--simply that they're rising at a slower pace.  This trend of deceleration is more than 6 months old now.

In a similar vein, CoreLogic also reported on rental price trends.  This has been a more bulletproof sector than home prices in terms of upward trends, but now CoreLogic is calling the peak in rent price appreciation.

Surprising some analysts, Freddie Mac announced bigger-than-expected profits, unequivocally avoiding the need for any taxpayer assistance.  As always, keep in mind that even if Freddie did require a draw from Treasury that it has already more than paid back the amount it borrowed from taxpayers.  It is only in a position to need a draw because the government takes all the excess profit from the GSEs under the conservatorship agreement.