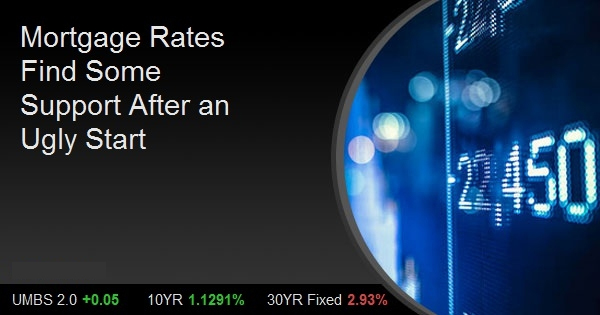 Mortgage Rates Find Some Support After an Ugly Start

Mortgage rates were off to a very bad start this morning, but recovered a portion of what they lost by the end of the day.  The specifics depend greatly on the lender in question.  Sadly, few if any lenders are still able to offer the rates seen yesterday.  To make matters worse, yesterday's rates were already significantly higher than those seen just one week prior.  But how about a big silver lining?

One week prior to yesterday, the average lender was offering all-time low mortgage rates.  So being "significantly higher" than that still hasn't been enough to move the average top tier conventional 30yr fixed quote up to 3%.  Before covid, 3.125% was the lowest ever 30yr fixed rate!  If you're in the purchase market, 2.75% is still common (2.875% for refis).  Lenders continue to be widely stratified depending upon how busy they are (higher rates in cases where lenders need to slow down inbound demand and vice versa).

Why are rates rising all of the sudden?  It's a combination of reasons, but the big catalyst was the outcome of Georgia's senate election last week.  In the bigger picture, it's as simple as the bond market (which dictates rates) adjusting for a future with more vaccines, less covid, and more unemployed people getting back to work and participating fully in the economy.  Naturally, there's a lot of uncertainty as to how effectively and how quickly that all happens.  As such, there's equal uncertainty about how quickly rates will rise in 2021.  For now, an air of mortgage rate invincibility and persistent setting of new record lows has been replaced by a healthy respect for what may be the first stage of a rising rate environment (the first time we've seen such a thing since 2018).