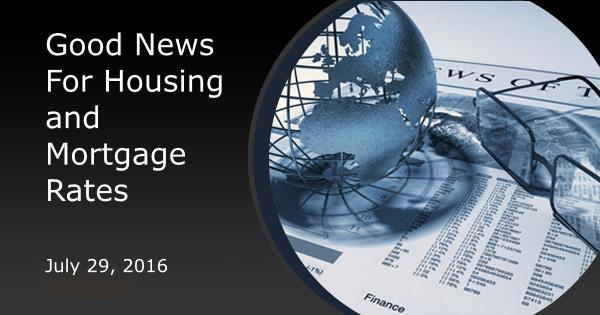 Although last week saw a 7-year high in Existing Home Sales, concerns about rates  and construction remained.  With 2 major central bank announcements and New Home Sales data, the current week definitely could have added to the anxiety.  Instead, it did just the opposite!

Let's start with rates.  By the beginning of this week, they stood at the highest levels since the Brexit news in late June.  Markets were clearly waiting to hear what the Fed and Bank of Japan had to say in their respective policy announcements on Wednesday and Thursday night.

The Fed was expected to talk up the economy, to some extent, given that the last jobs report was strong and that the fallout from Brexit has been less than catastrophic so far.  Some even feared the Fed would take a page from its own playbook and use the verbiage in the current policy announcement to telegraph a rate hike at the next meeting (September in this case).

The Fed did, in fact, have nicer things to say about the economy, but they clearly stopped short of telegraphing a September rate hike.  Although the Fed Funds Rate does not directly affect mortgage rates, if market consensus on the next hike is pushed further into the future (which was the effect of this week's announcement), most interest rates tend to fall.  Mortgages are no exception.

The policy announcement from the Bank of Japan might seem like an odd thing for domestic investors to be too focused on, but major foreign central banks have had a huge hand in creating the current reality for financial markets.  The Bank of Japan delivered a bit less than expected on Thursday night, thus putting slight upward pressure on rates.  But it wasn't enough of a shock to deter bond buyers.  Ultimately, rates moved back to 2-week lows by Friday afternoon.

In the bigger picture, not only does this keep the long term trend intact, but it really calls into question the doomsday scenarios in the financial news (interviews with analysts and strategists who say "the bottom is in" for rates).  In order for these doomsday scenarios to be worthy of our attention, rates would need to be much higher than they are right now--somewhere in the "danger zone" as seen in the following chart. 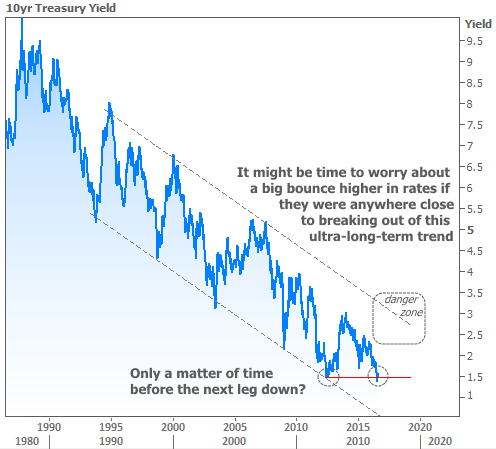 Not only are we not even close, it would be easier to argue an impending move to new all-time lows.  To be clear, rates can always move higher.  I'm merely saying that, based on the charts, the decades-long trend toward lower rates is alive and well.  People have been forecasting its demise for years, but it's not time to freak out yet.

Rising home prices are also doing a great job of avoiding their demise.  This week's Case-Shiller data showed a slight deceleration in the pace of gains, but not enough to change the trend of 5-6% year-over-year appreciation, which has been uncannily steady over the past 2 years. 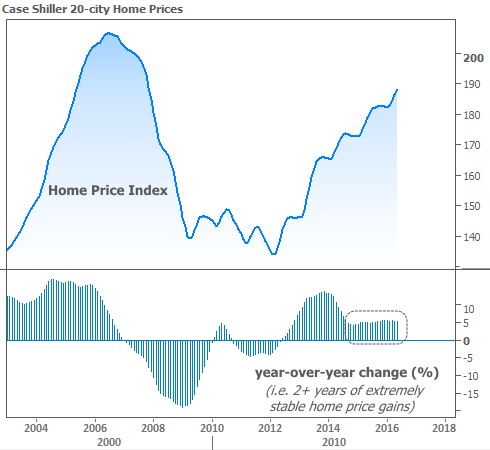 Rounding out the trio of good news, we had New Home Sales hit a post-crisis high this month, coming in a 592k homes versus a median forecast of 560k.  Granted, this is a more volatile data series, but it helps offset some of the weakness seen in last week's construction numbers.  This makes the past 5-6 years look stellar in terms of New Home Sales growth, but in the bigger picture, we're just now getting back to the middle of the pre-boom range. 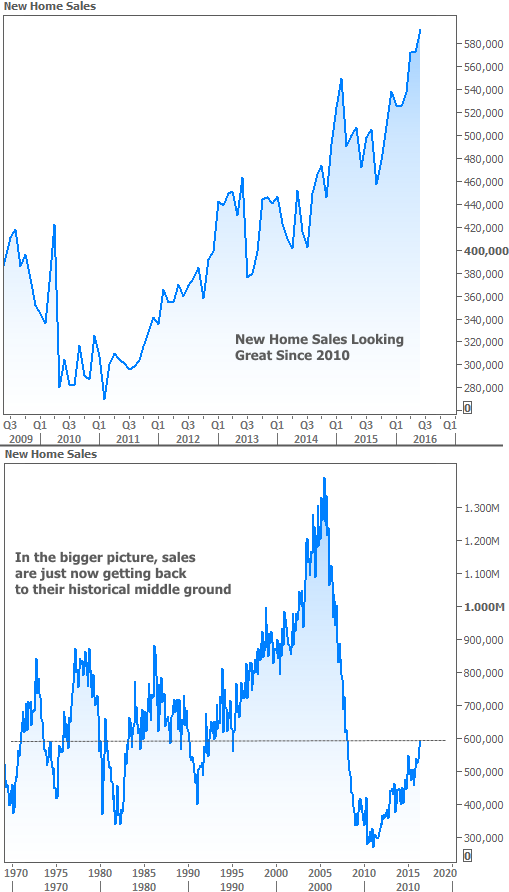 Housing data wasn't all sunshine though.  Pending Home Sales were equivocal, at best, missing their forecast despite rising slightly from the previous month.

Foreclosure starts were surprisingly higher, according to data from Black Knight, bucking a general trend of improvement in terms of mortgage performance.

Finally, the Census Bureau reported that homeownership fell to a new all-time low of 62.9 percent in the 2nd quarter.  The caveat here is that record-keeping is relatively new--having begun in 1995--compared to the amount of time Americans have been owning homes.

Next week brings a slew of important data, culminating in Friday's big jobs report.  If the data is unified in its message, it could have an even bigger impact on the Fed rate hike outlook than this week's policy announcement.  That means rates run the risk of bouncing in the event of strong data, and they stand a chance to move back to all-time lows of the data is weaker.