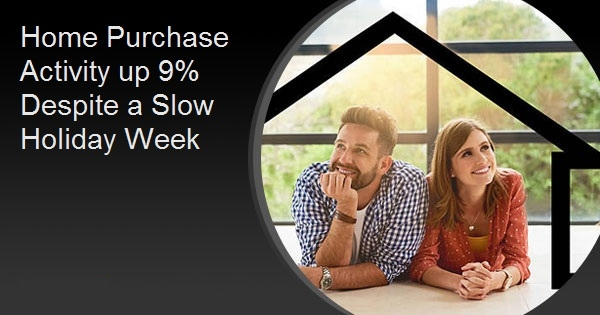 Home Purchase Activity up 9% Despite a Slow Holiday Week

There was the usual disruption to mortgage application activity during the Thanksgiving holiday week that ended November 27, although the volume, especially of purchase applications held up relatively well. The Mortgage Bankers Association (MBA) said its Market Composite Index, a measure of mortgage loan application volume, eased back by 0.6 percent on a seasonally adjusted basis from one week earlier and was down 32 percent absent adjustment. During Thanksgiving week in 2019 the adjusted Index fell by more than 9.2 percent.

The seasonally adjusted Purchase Index increased 9 percent from one week earlier but was down by 28 percent on an unadjusted basis. Activity was 28 percent higher than the same week one year ago.

"After adjusting for the Thanksgiving holiday, mortgage applications were mixed, with a jump in purchase applications and a decline in refinances. Purchase activity continued to show impressive year-over-year gains, with both the conventional and government segments of the market posting another week of growth," said Joel Kan, MBA's Associate Vice President of Economic and Industry Forecasting. "Purchase loan amounts continue to be significantly higher than their average over the past decade and hit $375,000 last week, the largest since the inception of MBA's survey in 1990. Housing demand remains strong, and despite extremely tight inventory and rising prices, home sales are running at their strongest pace in over a decade."

Added Kan, "The sustained period of low mortgage rates continues to spark borrower demand, and the mortgage industry is poised for its strongest year in originations since 2003. The ongoing refinance wave has been beneficial to homeowners looking to lower their monthly payments during these challenging economic times brought forth by the pandemic."

Both contract and effective interest rates were mixed, but the changes were minimal. The average contract interest rate for 30-year fixed-rate mortgages (FRM) with loan balances at or below the $510,400 conforming limit was unchanged at 2.92 percent. Points decreased to 0.31 from 0.35 and the effective rate declined.

The average contract interest rate for jumbo 30-year FRM, loans with balances that exceed the conforming limit, increased to 3.19 percent from 3.18 percent, with points increasing to 0.30 from 0.27. The effective rate also moved higher.

The average contract interest rate for 30-year FRM backed by the FHA moved up by 1 basis point to 3.00 percent. Points rose to 0.34 from 0.27 and the effective rate increased.

The average contract interest rate for 5/1 adjustable rate mortgages (ARMs) was unchanged at 2.63 percent, with points increasing to 0.47 from 0.44. The effective rate increased from last week.  The ARM share of activity decreased from 1.9 to 1.8 percent of total applications.

The share of loans in forbearance increased during the week ended November 22 from 5.48 percent of servicer portfolios to 5.54 percent according to MBA's latest Forbearance and Call Volume Survey. MBA estimates that 2.8 million homeowners are in forbearance plans. By stage, 20.34 percent of forborne loans are in the initial plan stage, while 77.42 percent have received extensions. The remaining 2.24 percent are forbearance re-entries.

"For the second week in a row, the share of loans in forbearance has increased, driven by a rise in new forbearance requests and another slowdown in the pace of forbearance exits. The increase was across all loan and servicer types. Even GSE loans, which had previously declined for 24 straight weeks, saw an increase last week," said Mike Fratantoni, MBA's Senior Vice President and Chief Economist. "Additionally concerning, there was an increase in forbearance re-entries, as borrowers who had previously exited sought relief again. The increase in new forbearance requests may be the result of additional outreach to homeowners who had previously not taken advantage of forbearance opportunities. However, the slowing rate of exits to a new survey low further highlights that borrowers still in forbearance are increasingly challenged by the renewed restrictions on economic activity to contain the surge in COVID-19 cases."

Added Fratantoni, "Recent housing market data remain quite strong and we expect that the market is well positioned for additional growth next year, but these data show that additional support is likely needed to get through this winter."

Of the cumulative forbearance exits for the period from June 1 through November 22, 2020, 30.3 percent were borrowers who had made their monthly payments despite being in forbearance. A loan deferral or partial claim was given to 24.3 percent while 16.6 percent reinstated their loans, paying past due amounts when exiting their plans.  Other dispositions: