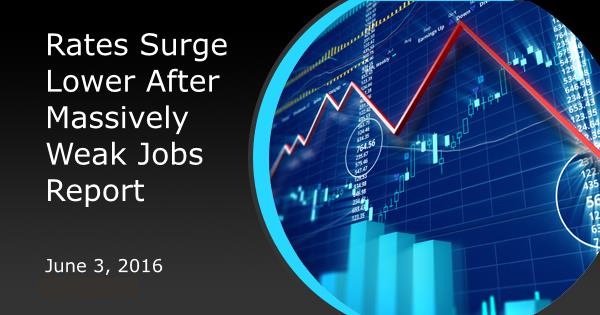 Back and forth and back and forth...  Rates have been bouncing reliably in an increasingly narrow range for most of 2016.  The regularity of these bounces is somewhat astonishing--almost as if markets set a course for the June 2016 Fed meeting and said "we'll decide which way to break out when the time comes."  Here's the chart I used to convey this sentiment last week: 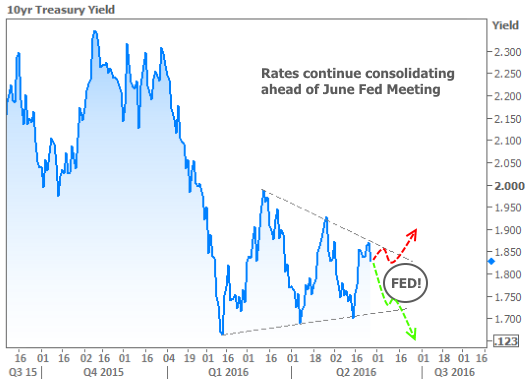 Rates remained under a fair amount of pressure during this most recent visit to the high side of the range (last week), but began to find their footing on this holiday-shortened week.  The first positive clue came on Thursday as rates reacted favorably to a press conference with European Central Bank (ECB) President Mario Draghi.

The ECB already has a negative policy rate, which definitely qualifies as "accommodative" in terms of monetary policy.  Some investors were worried that Draghi might back down from the accommodative stance in some small way.  This wasn't a major source pressure on interest rates, but it was enough to prevent a meaningful move lower.

Instead, Draghi doubled down, saying that rates would stay at current levels or lower (even more negative!) until well after the ECB's bond buying programs end in March 2017.  With that, rates at home and abroad began shifting lower from the very narrow range they'd been holding since May 18th.

The following day brought the big Employment Situation report (aka "the jobs report," or simply "NFP" because of it's chief component Nonfarm Payrolls).

NFP is the undisputed all-time king of bond market movers when it comes to economic data.  It ALWAYS has the ability to shake things up in a big way on the day of its release.  Historically, it's shaken things up well beyond that, often setting the trading tone for an entire month.

That longer-term capability has been consistently waning as job creation has remained refreshingly strong and steady--so much so that markets have been able to gloss over several recent jobs reports without much of a reaction.

This was/is quite logical.  After all, the Fed isn't as concerned with payroll growth as much as inflation and global economic stability.  With inflation holding steady enough on top of ongoing labor market strength, fears ramped up for a June or July rate hike.

The only thorn in the Fed's side when it came to committing to a June hike is the chance that the U.K. votes to exit the European Union on June 23rd.  This could cause significant disruptions in currency markets and end up making a Fed hike on June 15th look premature.

With all of the above in mind, the Fed has been preoccupied with getting a read on the likelihood of a British EU exit (aka "Brexit").  As such, markets have reacted to Brexit-related headlines as they've become available.  In general, the more possible Brexit is, the more markets trade like there's no chance of a Fed hike in June.

Enter this week's jobs report.  Whereas Brexit was the only major hurdle for the Fed to clear, this Employment report was so catastrophically weak that the Fed may, once again, be forced to consider the state of the labor market before hiking.  Nonfarm Payrolls came in at a paltry 38k versus a median forecast of 164k.  In the following long term chart of private payrolls (a more stable metric than nonfarm payrolls, which are periodically distorted due to Census-related hiring), it's easy to see just how different this particular report was compared to most any other report in recent memory. 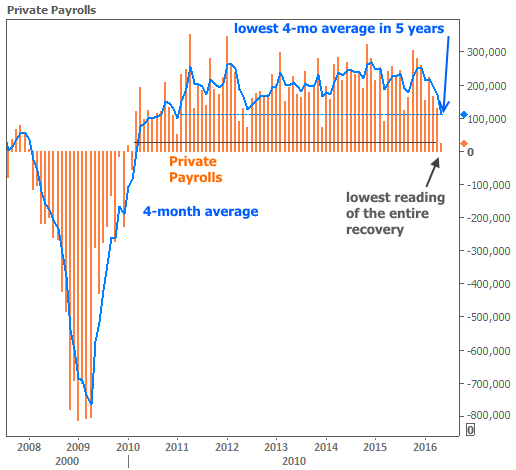 Granted, we have several historical examples of ultra-weak jobs reports being revised stronger in the following month, but the Fed certainly can't assume that will happen again this time.  They'll be forced to wait and see how the next jobs report comes out--something that all but eliminates the risk of a rate hike in June.

Bond markets wasted no time in trading accordingly.  10yr Treasury yields and mortgage rates surged lower, almost fully closing the gap on that long-term range.  In addition to the consolidation in rates themselves, momentum is also consolidating.  That's not always the case, and it simply speaks to a sincere level of indecision about what the future holds for rates. 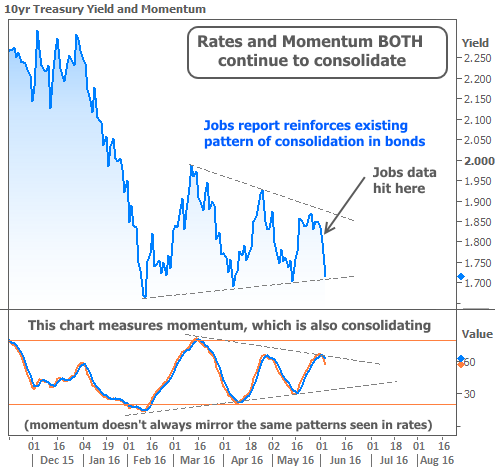 Bottom line: the long-term pattern has been reinforced in a major way this week.  We've gone from being at risk of an unfriendly breakout to the possibility of a friendly breakout (of the lower side of the range).

Other Economic Data and Housing-Specific News

Among the week's more interesting stories, a Redfin survey suggests that buyers are increasingly worried about other buyers.  Whereas affordability and inventory concerns are right in line with Q4 2015 levels, concerns over competition have risen by 8 percent.

In somewhat of a departure from last week's FHFA news that had annual home price appreciation running over 6%, this week's Case-Shiller data pegs the figure at 5.2 percent, down a bit from last month's 5.4 percent reading.  Notably, several Western regions remain in double digit territory.

Not that it's a particularly highly regarded piece of data, but Construction Spending asked for some of this week's spotlight, falling at the fastest pace in more than 5 years.  As the chart shows, this data is prone to volatility, not to mention the fact that we're still dealing with less than a 2 percent drop. 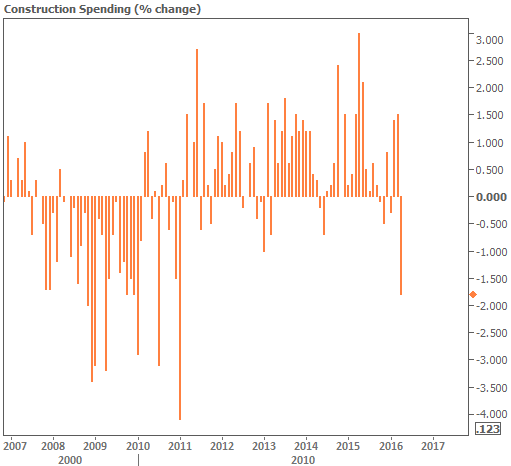