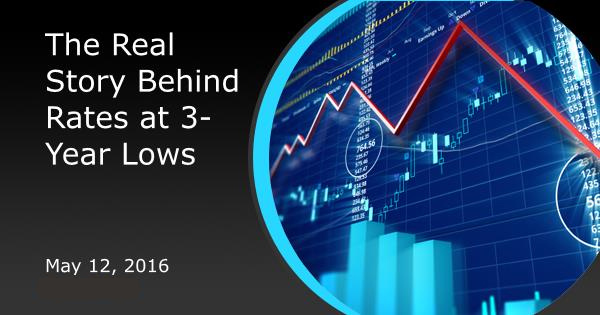 The Real Story Behind Rates at 3-Year Lows

It has been a very slow week in terms of economic data and market movement, thus leaving us plenty of time to focus on the notion of "the lowest mortgage rates in three years!"

Rarely do mortgage rates make the evening news, but exceptions will be made for Thursday considering the widely-cited Freddie Mac Primary Mortgage Market Survey hit its lowest level since  May 2013 this week. But  really at 3-year lows?

Freddie's survey is good for what it is: a synthesis of email replies from loan officers around the country who are asked what rates they are quoting.  The only catch is that replies are only accepted on the first three days of the week and the majority of them arrive on the first 2 days.  As such, Freddie's weekly rate survey is really the Monday/Tuesday average.

As you may have seen throughout the years, a lot can happen from Wednesday afternoon through Friday.  This is made all the  by the fact that Fed Announcements, European Central Bank Announcements, and the important Nonfarm Payrolls numbers always fall within that window.  It makes for a lot of potential rate movement that is not captured by the Freddie numbers.

It's only on those 'uncaptured' days that we've seen rates any lower than they were this week.  The following chart shows those individual days as well as the time period that serves as the benchmark for the lowest rates in history. 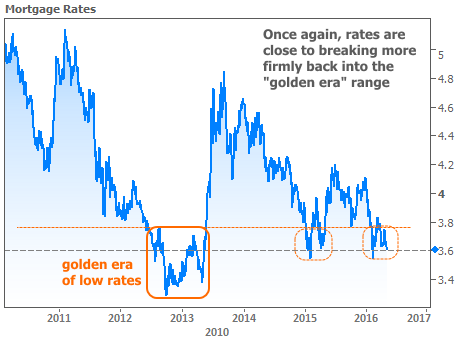 As the chart shows, we've been flirting with the upper limits of that 'golden era' range for most of the year.  The difference between this week being "3-year lows" is fairly negligible versus several other recent weeks.  A better achievement would be to break back into the lower portion of the golden era range.  In order for that to happen, something will need to change, both in the economy and in the outlook for Fed rate hikes.

I've said before that the Fed Funds Rate does not directly affect mortgage rates.  While that's definitely true, it's also true that mortgage rates haven't ever moved consistently lower if Fed rates have been moving higher.  The big question is whether or not the Fed will continue to push rates higher. 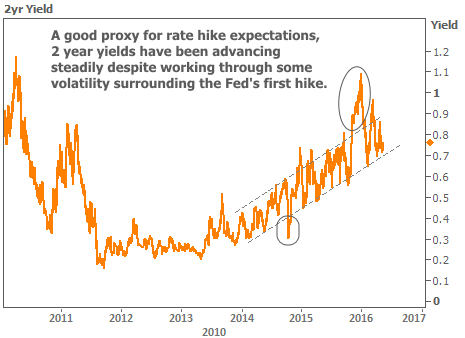 Mortgage rates have been able to make it back to current levels because the pace of Fed rate hikes has been slower than expected, but it's important to note that expectations continue suggesting gradually higher rates.  Bottom line: as long as 2yr yields continue inside these parallel lines, mortgage rates will have a hard time making it back to their golden age.

CoreLogic noted a surge in foreclosures in March with the caveat being that annual numbers continue to fall.  In a separate article, CoreLogic pointed out the increased prevalence of "flipping" in the current housing  but characterized it as modest when compared to levels seen in the  to the housing crisis.

Fannie Mae released its Home Purchase Sentiment Index, which showed a huge increase in the number of consumers who think it's a good time to sell a house.

Fannie also reported on TRID (the new mortgage disclosure rules that went into effect last October) fallout, saying that it has been a disproportionately higher burden on smaller lenders.