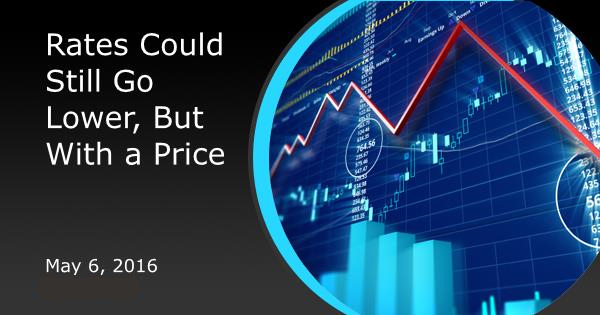 Rates Could Still Go Lower, But With a Price

Interest rates continued to move lower this week as bond markets followed through on their initial reaction to last week's Fed Announcement.  They were helped along by a series of weaker-than-expected economic reports including the April employment data released on Friday.

Historically, we've seen far more correlation between economic data and market movement than we're seeing right now.  That's because markets are only interested in very specific clues that might be gleaned from the data.  Specifically, markets want clarity on the Fed's rate hike path and a better read on the risk of a major downturn in stocks or the economy.

It should be noted that market participants typically haven't had to worry about both of these eventualities (Fed hikes and bear markets) at the same time.  Fed hikes are usually well underway by the time stocks maintain bull market status for a few years.  This time around, the stock rally was already "old" by historical standards before the Fed began hiking.

Enter the curveball: growing doubt that the Fed will even be able to hike before the next economic downturn.  Markets now see the SECOND fed rate hike happening in 2017!

Earlier this year, the Fed's reluctance to hike helped stocks pull up from their nosedive.  Now that stocks have corrected, all that remains is uncertainty.  The question at the back of everyone's minds: if stocks can't break to new highs with the Fed holding rates this low, how can they possibly avoid another nosedive?  How can the Fed continue its plan to hike rates if it brings about the next recession?

This burgeoning uncertainty is helping rates stay inside the ranges seen in the following chart. 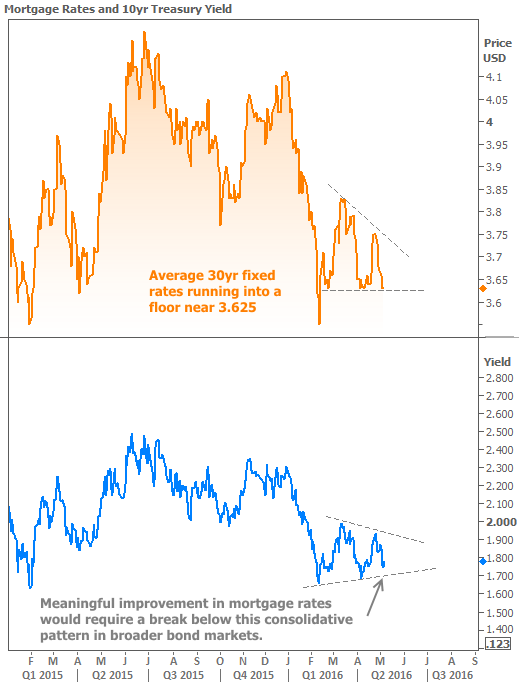 For the sake of perspective, here's what's at stake in the event that interest rates are indeed able to break lower.  The following chart is a longer-term view of 10yr yields and stocks.  If rates break lower, it would set us up for a run at all-time lows.  But the price of admission could be a move into bear market territory for stocks. 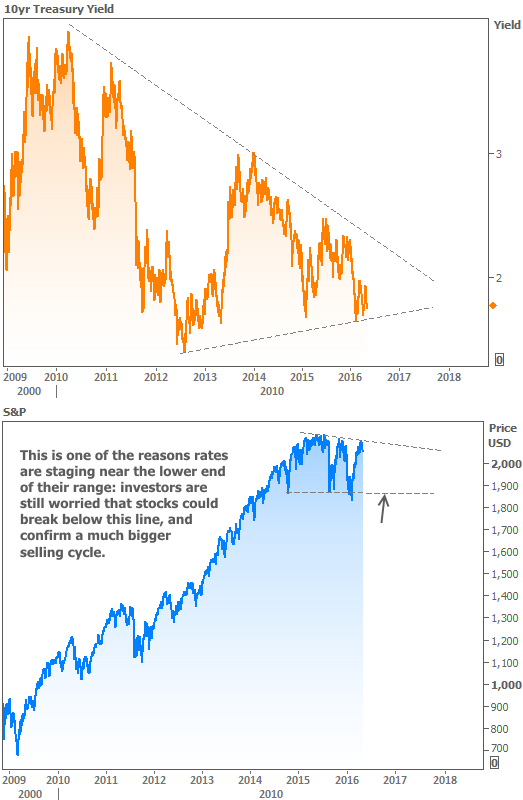 In  news, there were several readings on home prices out this week.  As has been the case, gains continued to be the norm. CoreLogic's Home Price Index was substantially higher yet again, with March prices 6.7 percent higher than March 2015 and 2.1 percent higher than February.

Home price gains are a double-edged sword according to Black Knight's Mortgage Monitor report.  The firm noted the impacts on affordability as the overall decline in mortgage rates hasn't been able to keep up with the pace of rising prices.

Both Fannie and Freddie reported earnings this week.  Freddie Mac posted its first loss since 2012, but it wasn't enough to trigger a draw on its line of credit with the US Treasury.  Even if it did, Freddie is definitely back in black considering it's paid $98.2 bln back to Treasury versus the $71.3 bln it received in support. While there had been some speculation that Freddie would need to request additional taxpayer funds

Fannie Mae posted a profit and thus will be adding to the money already paid back to Treasury.  With this quarter's expected dividend, the total comes to $148.5 billion versus a cumulative draw of $116.1 billion.