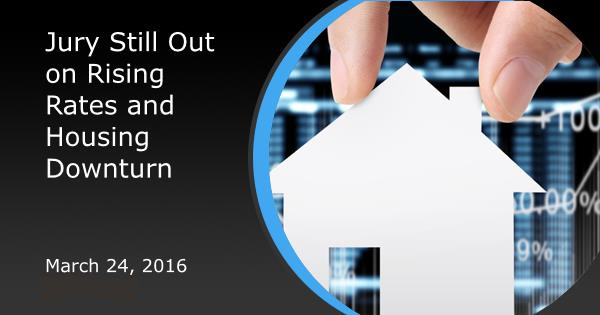 Jury Still Out on Rising Rates and Housing Downturn

By most measures the housing market has been improving consistently since at least 2010. Some would say that the pervasiveness of the improvement was only made possible by the housing crisis setting such a low starting point, but that’s neither here nor there.

What matters is whether housing is merely leveling-off after a solid run or if we’re actually turning a corner. Data has been mixed in that regard. The week’s most candid assessment came from Fannie Mae, who came right out and said that housing was off to a softer start in 2016.

When it comes to reasons behind the softness, a theme is emerging: “it’s not the economy.” In fact, Fannie notes a consistently smaller percentage of the population who says it’s a “bad time to buy” based on the economy. Rather, the key issue is affordability.

Prices continue rising faster than wage growth can keep up in many areas of the country. RealtyTrac notes that the percentage of counties where affordability is worse than it was in 2005 rose from 2 percent to 9 percent over the past year. And in discussing the weakness in Existing Home Sales, NAR points out that the persistently low inventory levels are doing nothing to help prices.

Affordability might not be such a hot button issue right now if it weren’t for mortgage rates being in the high 3 percent range. This is historically low, of course, and if this is the best that housing can do with these rates, we can all well imagine that numbers would only be weaker if rates were in the 4’s or 5’s.

While we’re not skyrocketing into that territory any time soon, the jury is still out on rates’ better days being behind us for now. The first 2 weeks in March were brutal, but then last week helped to undo some of that damage. In the most recent week, rates failed to capitalize on last week’s momentum, leaving the bigger picture in limbo to some extent.

Rates have been keeping an eye on other markets, after having enjoyed such a strong run in the first part of the year thanks to weakness in stocks and oil. Much of the recent rate rise can be traced back to resilience in those other markets, but those markets are also saying the jury is out.

For instance, the following chart shows a trend in stocks that has largely been helpful for mortgage rates. Notice how stocks recovered at the same time that rates have been moving higher, but without actually breaking outside the trend boundaries. 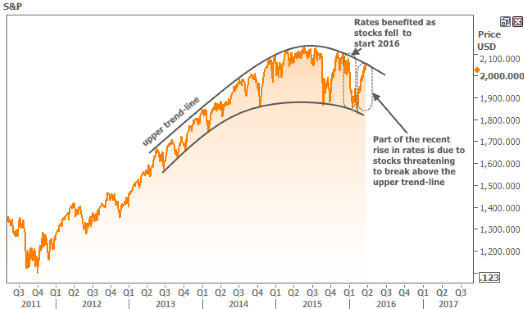 This isn’t just a short term consideration. Even in the much broader context of the decades-long trend toward lower rates, current levels are very close to the middle of the road. The following chart contains 10yr Treasury yields (which tend to move in concert with mortgage rates) going back to 1986. The line in the middle is a simple regression line (meaning half of those days are above and half are below). 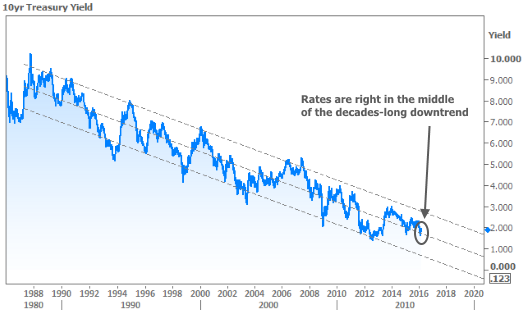 There is both hope and caution in this chart. On a hopeful note, if the trend continues, we’ll see all-time low rates in the next few years. On a cautionary note, even if the trend ultimately continues, rates could go much higher before breaking that upper line.