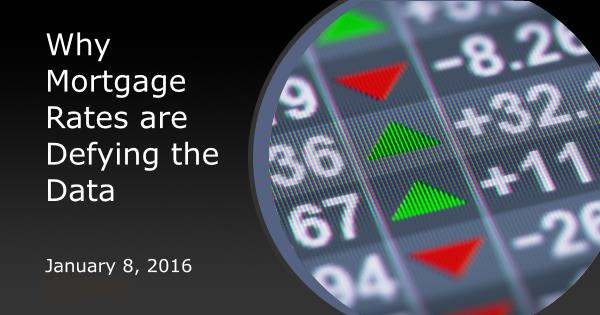 Why Mortgage Rates are Defying the Data

Spend even a small amount of time following mortgage rates and you can’t help but come across the following conventional wisdom: mortgage rate movement is closely tied to economic data.

“Economic data” is a somewhat ambiguous term, but in this context, it refers to the scheduled economic reports that are released by various government and private agencies. For example, we’re talking about things like GDP (Gross Domestic Product), New Home Sales, and NFP (Nonfarm Payrolls).

Over time, it is true that weaker economic data tends to coincide with lower interest rates. Even on shorter time scales, a report like NFP (the most important piece of economic data month in and month out) almost always has a significant impact on interest rates on the first Friday of each month.

It would normally be alarming, then, to see an NFP like this week’s. It came in at a tremendously strong 292k jobs compared to a median forecast of 200k. That sort of performance normally kills mortgage rates, but instead, rates are at the lowest levels in a month! What’s up with that?

First of all, financial markets can always move for non-economic reasons, and they tend to do more of this at the beginning and end of any given year. Some of the paradoxical movement could indeed be due to that phenomenon, but there’s definitely an elephant in the room: global stock markets. Led by anxiety over an increasingly disconcerting situation in Chinese markets and the Chinese economy, global stock prices are off to a horrible start in 2016.

This, of course, coincides with the Fed hiking rates just last month as US stocks failed to make it back to 2015’s highs. You may have come across the “punch-bowl” analogy for Fed policy (i.e. accommodative policy has been keeping the party going for financial markets). With China-related anxiety happening at the same time that the Fed is moving the proverbial punch bowl off the table, some investors worry that there could be even more pain in store for stocks. In simpler terms, they’re worried this could be the big turning point for the multi-year rally.

While that’s bad news for 401k balances, it’s good news for mortgage rates. In a world where the Fed hike was widely seen as putting gradual upward pressure on rates, the money flying out of equities markets needs a place to go. Some of it has been making its way into bond markets, including those that underlie mortgage rates. As money floods in, prices of mortgage-backed-securities (MBS) rise, and rates fall. Because of this phenomenon—this global flight of capital toward safer havens—mortgage rates have managed to fall despite several pieces of strong economic data this week.

The question, of course, is how long this will last. Considering the fact that we’re operating in uncharted territory in terms of Fed rate hike cycles (no precedent for a lift-off from zero!), it doesn’t make much sense to guess. While there are conceivable scenarios where rates could continue to fall, we’ve seen similar pockets of opportunity in the past that have proven to be short-lived. We can already see that rates (represented in this chart by the 10yr Treasury yield that closely tracks mortgage rates) have not been as eager to follow the flight of capital in riskier assets. Plan accordingly: 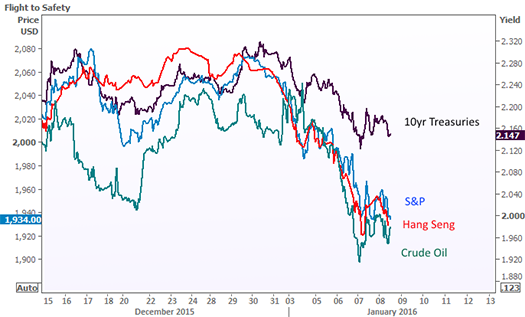 Housing-specific news has been fairly light this week with the biggest headlines pertaining to the home price indices. Black Knight noted that while the nation, as a whole, continued to appreciate, California had taken a turn for the worse. CoreLogic was more upbeat than its peers on prices, seeing annual appreciation of 6.3 percent.

Trying to make sense of home price fluctuations in the middle of winter is tricky business because of the natural retreat in prices that happens almost like clockwork. It’s too soon to tell if this cycle (seen in the 1st Case Shiller chart below) will repeat itself yet again in 2016, but it is clear that the pace of improvements is leveling-off (seen in the 2nd chart of year-over-year change). 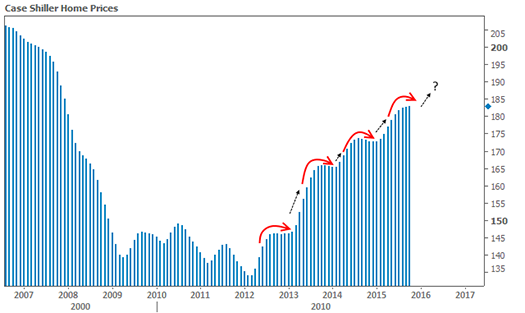 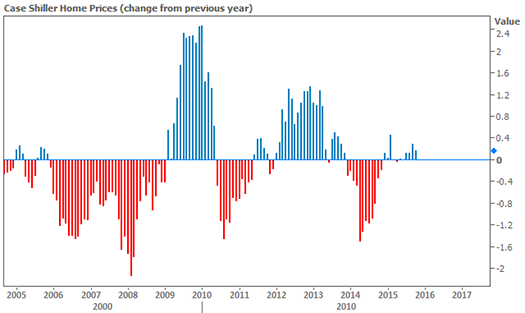