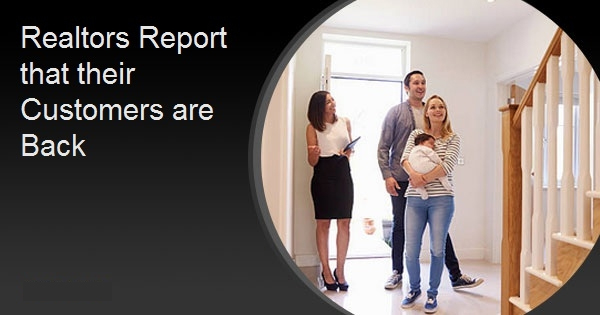 Realtors Report that their Customers are Back

A new survey by the National Association of Realtors® (NAR) has found that the vast majority of its members feel as though their businesses are back on track. NAR says, "After enduring months of setbacks brought on by the coronavirus pandemic...more than nine in 10 members believe they are in the process of recovering as many states start to reopen their economies."

Ninety-two percent of the residential and commercial Realtors who responded to the 2020 Market Recovery Survey said that at least a portion of their buyers are back and of those, 18 percent said they never left. Nine percent said all of their buyers had returned with agents in small towns and rural areas more likely to report either no interruption in activity or a more robust return of buyers to the market.

"The residential market has seen a swift rebound of activity as numerous states have begun to ease mandatory stay-at-home orders," said Lawrence Yun, NAR's chief economist. "Many potential buyers and home sellers were kept at bay in the initial stages of the coronavirus outbreak, but Realtors® nationwide were able to quickly pivot, embracing technology and business practices to ensure the home buying process continued in a safe manner."

Home sellers, according to 89 percent of respondents, either never delisted their property or have made them available again. Suburban and urban markets are more likely to have reported fewer sellers returning to the market compared to small and rural markets.

NAR said while much of the market was caught off-guard by the arrival of the COVID-19 pandemic, many members are now prepared should there be another surge. Thirty-nine percent said they are at least somewhat prepared, and 19 percent said they are "very prepared" should that happen. Twenty-seven percent indicated that they are concerned enough that they have changed their business practices in some form in order to be prepared for another bout with the virus. Among agents who are currently working with buyers, more than half say those buyers have not changed their buying timelines and two-thirds of those working with sellers say the same. Twenty-seven percent of agents say their buyers and 23 percent report that sellers are expressing more urgency about their transactions.

"A number of potential buyers noted stalled plans due to the pandemic and that has led to more urgency and a pent-up demand to buy," said Yun. "After being home for months on end - in a home they already wanted to leave - buyers are reminded how much their current home may lack certain desired features or amenities."

There were also some reported changes in buyer preferences. About a quarter of respondents indicated their buyers had shifted the location of where they intend to buy a house due to the coronavirus. Among those, 47 percent stated that their buyers prefer to purchase housing in the suburbs, 39 percent cited rural areas, and 25 percent said there was a preference for smaller towns.

Thirty-five percent of those polled said buyers have changed at least one feature on their list of what they want in a home. Most common among these are home offices, spaces to accommodate new family members - older adult relatives, newborns, or new pets - larger homes with more personal space and bigger yards that would allow for growing foods.

Thirteen percent said that homebuyers changed their preferred home type from multi-family to single family, a change most notable in urban markets at 16 percent. Thirty-three percent said their buyers had adjusted commuting needs since the crisis began; 22 percent are less concerned with their commute and 7 percent want to live close to bike trails that connect them to work. Just 5 percent had a greater concern about parking or about a location that lets them drive to work.

The survey found more hardships among members working on the commercial side of real estate. Only 19 percent of property managers and 36 percent of individual landlords reported receiving all rent payments on time.

Further, 74 percent say they have had leases terminated or tenants who need rent payment extensions; 56 percent of these were non-essential retail customers and 38 percent were in the office sector. There were few problems reported among grocery store tenants.

"Consumers have been forced to move away from buying in stores and are now doing much more shopping from home," said Yun. "Unfortunately, this has come at the detriment of commercial property owners, but these circumstances could be an opportunity for growth in the industrial warehouse market, as Americans have become more reliant on home delivery services."

A majority of Realtors said they saw challenges ahead for their tenants, many of whom are concerned their customers won't return. They are also worried about a resurgence of the outbreak forcing another shutdown (66 percent), protecting the health of employees, (61 percent) and challenges with implementing social-distancing measures (59 percent).