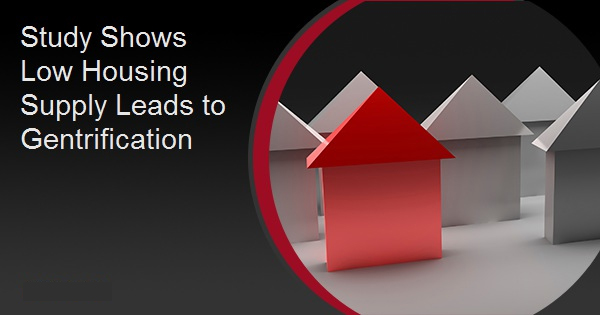 A study by the Urban Institute (UI) has found a strong correlation between the home price to income ratio in an area and its rate of gentrification. The results are published on UI's Urban Wire blog in a post written by analysts Ellen Seidman, Jun Zhu, and Laurie Goodman. The authors say it is important to understand what increases the pace of gentrification, which they define as how fast high-income homebuyers move into low-income neighborhoods.

Using data from the 2018 Home Mortgage Disclosure Act and 2018 American Community Survey data, the researchers examined the movement of high-income borrowers into low-income areas and the varying pace of this movement across different metropolitan statistical areas (MSAs). The focus was on income rather than homebuyers' race or ethnicity as that data was not available with sufficient granularity.

The authors first determined the prevalence of high-income homebuyers in LMI areas, then examined the price-to-income ratios (using area median incomes, or AMIs) in the 20 largest MSAs to get a sense of housing supply challenges. Using new mortgages as a measure, they found that nationally, high-income buyers (those earning above 120 percent of the AMI) buy homes in LMI neighborhoods at a slightly higher rate (29 percent) than their current ownership rate (26 percent) in those neighborhoods. The biggest difference nationally between new mortgages and current ownership rates is in the share of mortgage borrowers in the low-income group. There are comparatively few new mortgage borrowers with low incomes relative to the share of current homeowners with those incomes. The authors attribute this in part to the lack of supply of available homes and of mortgages at the low end of the housing price spectrum.

They also found that the income distribution of all homeowners and rents did not vary much across the MSAs in their study, but the distribution of new mortgage borrowers in 2018 did. They looked at the number of high-income borrowers in LMI neighborhoods in a few MSAs, including Los Angeles and Chicago and found that, in cities with limited housing supply, high-income homebuyers disproportionately seek out LMI areas.

And in LMI neighborhoods there was a 60 percent purchase rate by high-income borrowers, 7 points higher than the city-wide rate, while current ownership was 38 percent. This could lead to rapid gentrification in those areas. The figure above shows the relationship between the price-to-income ratio and the share of recent purchases by high-income borrowers in low-income neighborhoods for the 75 largest MSAs; a correlation the authors say, while not perfect, is high.

They also found the price-to-income ratio is a more important determinant than is home price regarding the propensity of high-income people to buy in LMI areas. The $909,000 median home price in San Francisco far exceeds Los Angeles's $699,000, but the latter's 9.14 price-to-income ratio exceeds San Francisco's 8.33 ratio, and a substantially greater share of high-income households buy in LMI neighborhoods in Los Angeles.

The authors say that in those areas with high ratios even those with high income are stretching to buy a home and are increasingly venturing into low-and median income neighborhoods, making it difficult for those lower incomes to buy there, especially as prices for low-price tier homes have increased faster than more expensive ones. The high ratio areas also tend to have lower homeownership rates than the national average, especially in California, but New York and Miami also show signs of high-income movement into LMI neighborhoods and somewhat depressed overall homeownership rates.

The authors conclude that encouraging growth in the housing supply by easing restrictions on building and boosting alternatives such as manufactured housing and accessory dwelling units, the pace of gentrification could be slowed.