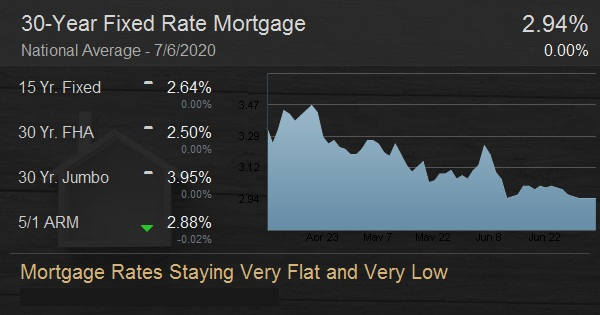 Mortgage rates barely budged for the third straight day, which is welcome news considering they are at all-time lows. The stability comes in spite of at least two important economic reports that would normally push rates unequivocally higher according to past precedent.  These include Thursday's big jobs report and a key barometer of the services sector released this morning.  Both pieces of data suggested an economic recovery is well underway.

Even though there is certainly a lot more ground to cover before anyone would consider the economy to be "mostly restored' to pre-COVID levels, financial markets are usually willing to reward progress toward such goals.  While one might be able to make the case that the stock market is doing just that, the bond market (which dictates interest rates) isn't playing by the normal rules.  There are several reasons for this, but the simplest one is that the jury is still out with respect to rising COVID statistics in several states.

When it's clear that a majority of the economy is once again operating as it was before coronavirus (to whatever extent that's possible), or even when we're clearly headed in that direction, THAT'S when we're more likely to see the telltale effects on interest rates.  Until then, low rates and small day-to-day changes are the rules.