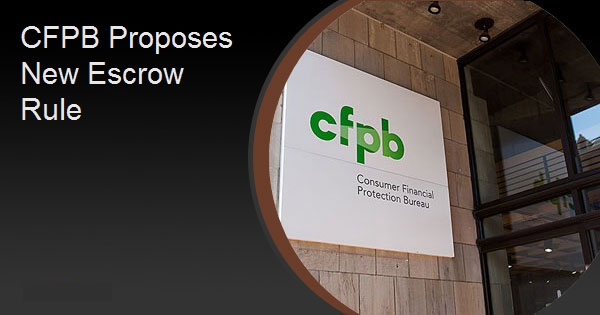 The Consumer Financial Protection Bureau (Bureau) today issued a notice of proposed rulemaking (NPRM) that would amend Regulation Z of the Truth-in-Lending (TIL) Act. The rule would provide a new exemption for some insured depository institutions and insured credit unions from the requirement to establish escrow accounts for certain higher-priced mortgage loans (HPMLs).

Under Regulation Z, some insured depository institutions and credit unions are required to set up escrow accounts for specified higher-priced mortgage loans (HPMLs). These are closed-end residential loan transactions with an annual percentage rate that exceeds the current average prime offer rate for a comparable transaction by specific amounts. In setting up this escrow requirement, the 2008 Dodd-Frank Act generally adopted a similar rule the Federal Reserve had made in 2005 specifically targeting subprime loans. However Dodd-Frank excluded certain loans, such as reverse mortgages, from the escrow requirement and gave the Consumer Financial Protection Bureau (CRPF), which had rule-making authority, permission to exempt smaller creditors and those operating "predominantly" in rural or underserved areas.

Over the next few years Congress gave CFPB authority to create additional exceptions. In 2013 the Bureau exempted creditors with under $2 billion in assets from the escrow requirement and in 2015 Congress amended TILA section 129D by striking the term "predominantly" for creditors operating in rural or underserved areas.

Today's proposed amendment would generally exempt from the Regulation Z HPML escrow requirement any loan made by an insured depository institution or insured credit union and secured by a first lien on the principal dwelling of a consumer if (1) the institution has assets of $10 billion or less; (2) the institution and its affiliates originated 1,000 or fewer loans secured by a first lien on a principal dwelling during the preceding calendar year; and (3) certain other criteria are met.  The proposed amendment would further the goals of the 2018 Economic Growth, Regulatory Relief, and Consumer Protection Act (EGRRCPA) by reducing costs associated with escrow requirements.

CFPB is inviting public comment on the proposed rule within 60 days of its publication in the Federal Register. In issuing the NPRM the Bureau has commenced its last mandatory rulemaking to implement EGRRCPA. The entire rule can be read here.