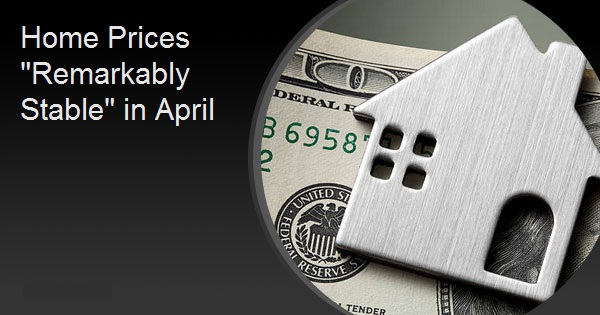 Home prices continued to hold up on a national basis in April. The S&P CoreLogic Case-Shiller U.S. National Home Price Index, covering all nine U.S. census divisions, reported a 4.7 percent annual gain in April, up from 4.6 percent in March. The National Index posted a 1.1 percent month-over-month increase before seasonal adjustment and an 0.5 percent gain after it.

The 10-City Composite appreciated at an annual rate of 3.4 percent, unchanged from the March rate while the 20-City Composite's annual increase rose to 4.0 percent from 3.9 percent the previous month. The 10-City and 20-City measures had monthly increases of 0.7 percent and 0.9 percent respectively before seasonal adjustment and both posted 0.3 percent increases after adjustment.

In April, all 19 cities (excluding Detroit for which sufficient data was not available due to a county recording office shutdown) reported increases before seasonal adjustment. Sixteen of the 19 cities reported them afterward.

Phoenix, Seattle, and Minneapolis had the highest year-over-year appreciation among the 19 cities reporting with annual increases of 8.8 percent, 7.3 percent increase and 6.4 percent, respectively. Twelve of the 19 cities reported higher price increases in the year ending April 2020 versus the year ending March 2020. Cleveland, which has long lagged all other cities on the index, posted a 6 percent increase in April. "April's housing price data continue to be remarkably stable. The National Composite Index rose by 4.7 percent in April 2020, with comparable growth in the 10- and 20-City Composites (up 3.4 percent and 4.0 percent, respectively). In all three cases, April's year-over-year gains were ahead of March's, continuing a trend of gently accelerating home prices that began last fall. Results in April continued to be broad-based. Prices rose in each of the 19 cities for which we have reported data, and price increases accelerated in 12 cities.

"As was the case in March, we have data from only 19 cities this month, since transactions records for Wayne County, Michigan (in the Detroit metropolitan area) continue to be unavailable. This is, so far, the only directly visible impact of COVID-19 on the S&P CoreLogic Case-Shiller Indices. The price trend that was in place pre-pandemic seems so far to be undisturbed, at least at the national level. Indeed, prices in 12 of the 20 cities in our survey were at an all-time high in April. Prices were particularly strong in the West and Southeast, and comparatively weak in the Northeast."