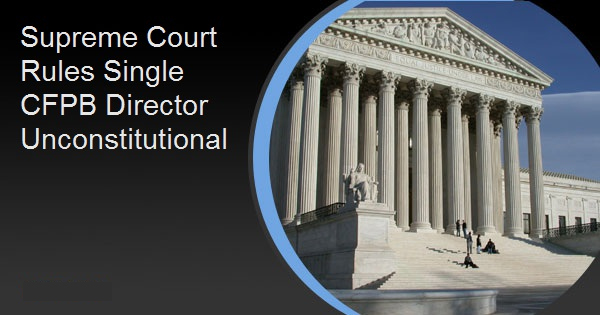 The Supreme Court, in a 5-4 decision along partisan lines, took a chunk out of the intentions the Dodd-Frank Act had for the Consumer Financial Protection Bureau (CFPB) when it created it. The court ruled that the single-director structure of the agency is unconstitutional as is its limits on the President's ability to replace its occupant.

When Congress established CFPB it set up its funding mechanism independent of the House appropriations process, ruling its budget should come from the Federal Reserve. It also established a single director to head the agency and protected the occupant from being fired except for "inefficiency, neglect of duty or malfeasance in office" during a five-year term,  Each stricture was a bid to insulate the agency from political interference.

FHFA which regulates and is currently conservator for the mortgage giants Fannie Mae and Freddie Mac has a similar structure. The decision could also put into question agencies overseen by boards or commissions established with political buffers. For example, the Federal Reserve's Board of Governors has members who are appointed to 14-year terms and are not removable by the president except for cause.

The decision, written by Chief Justice John Roberts, said that CFPB's structure vests too much power in the hands of one person, and that the president has broad authority to appoint and remove agency heads.

"The CFPB's single-Director structure contravenes this carefully calibrated system by vesting significant governmental power in the hands of a single individual who is neither elected by the people nor meaningfully controlled (through the threat of removal) by someone who is," Roberts wrote.

He also stated that the agency's structure "has no foothold in history or tradition" and violates the separation of powers. However, the court will allow the agency to continue to operate and did not make any rulings about the Dodd-Frank Act. One fear, when the challenges to the structure first began, was that an unconstitutional ruling would endanger the many decisions, settlements, and rulemakings the agency has made over a 9-year period. This decision leaves those actions and rules, such as the Qualified Mortgage rule intact.

Katie O'Donnell, writing in Politico, said the Bureau was polarizing from its start during the Great Recession. "with Democrats casting it as a long-overdue cop on the beat for consumers after the 2008 financial crisis and Republicans slamming the agency as an example of regulatory overreach.

"Yet where Democrats see independence, Republicans see a lack of accountability. Republicans have long sought to overhaul the agency's single-director structure and replace it with a bipartisan commission akin to the leadership of other financial regulators. GOP attacks have abated since Trump put his own people in charge of the bureau, but the leadership issue has never been resolved."

The current director, Kathy Kraninger, was appointed by President Trump after the first director, Richard Cordray, resigned in 2017 to run for governor of Ohio. That provoked a court battle after Mick Mulvaney, the Director of the Office of Management and Budget, was appointed acting director. The Dodd-Frank Act sets up an order of succession for the Bureau, authorizing the assistant director to act as director until the Senate can confirm the President's next appointment. Kraninger was Mulvaney's assistant at OMB.

The Supreme Court ruling does set up an interesting scenario. Kraninger previously had a good chance to fill out her five-year term. She now has to assume her appointment, which was highly controversial at the time, will not outlast the current administration should the White House turn over in January. Given the recent history of presidential appointments, she also has to worry she won't last even that long.