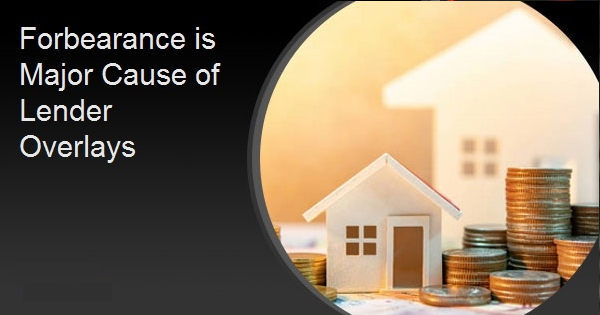 Forbearance is Major Cause of Lender Overlays

In his analysis of current mortgage credit tightening for the Joint Center on Housing Studies excerpted here earlier, Don Layton included a special section on lender overlays. The former Freddie Mac CEO focused specifically on how those overlays may be affected by the borrower forbearance mandated by the  CAREs Act for borrowers impacted financially by the COVIC-19 pandemic.

During and after the 2008 housing crisis mortgage intermediaries (originators) added their own underwriting requirements to those required by the GSEs, FHA, and the VA. These overlays were designed to counter "representation and warranty risk," - i.e., the possibility they would be required to buy back and possibly absorb default losses from loans they sold to the government agencies that lacked characteristics required for a sale to be valid.

Layton says it took years of work to eliminate these overlays on GSE loans. Restructuring the processes to reduce representation and warranty risk demonstrated how large and costly each step in the origination process could be.

Those overlays appear to be back and have made the GSEs and FHA/VA appear to be more procyclical than they, on their own accord, actually are. Housing finance policy is therefore focusing on these overlays to see if credit tightening can be reduced without overt or covert cost to the taxpayer.

As a general matter, mortgage originating intermediaries are currently processing record volumes of refinancing and those that are also servicers are under some liquidity pressure, largely due to the COVID-19 forbearance requirement. These factors lead to some bias toward overlays.

The current forbearance policy was developed by the Federal Housing Finance Agency (FHFA) for the GSEs after hurricanes hit Texas, Florida, and Puerto Rico in 2017. It was designed to address the temporary dislocation of a natural disaster and was motivated by a desire to minimize credit losses on existing mortgages over a limited period.

When the current round of forbearance was mandated it seemed reasonable, especially because the pandemic disruption was assumed to be rather short term. While hurrying to provide help, however, the idea it wasn't fully thought through and it allowed forbearances to apply to new loans as well as existing ones.

Layton says a loan in forbearance is simply not worth 100 cents on the dollar. Revenue is lost during the forbearance period and the risk of no recovery is too great. This has created two problems.

First, loans "in transit," already closed and in the hands of intermediaries when forbearance was announced, immediately dropped in value when borrowers requested a plan. Since agencies will not normally buy loans in forbearance as it is a form of default, this caused a loss to intermediaries and more stress on their liquidity.

The second subset, which Layton calls "quick-forbearance" loans are those that go into forbearance between closing and sale or becoming insured. They also drop in value and drain  liquidity.

Both types of loans are hot potatoes that no one, intermediaries or government agencies, wants to get stuck with and thus have become probably the largest and most concrete source of overlays, focused on avoiding the riskier loans most likely to become quick-forbearances Layton points that, at first these loans may have been in process when the pandemic hit, but by now in-transit or quick-forbearance loans may belong to borrowers who are "gaming" the system.

FHFA, both in response to industry complaints and in hopes of reducing overlays has waved the GSE  prohibition on taking loans in forbearance, easing the liquidity problem, but has pushed the loss in value fully onto the intermediary. Now the industry is lobbying Congress to force the agencies to take both the liquidity and earnings burdens off their hands.

It is unclear whether their proposal applies only to in-transit loans or to quick forbearance loans as well. If it applies only to the former, there would not be an incentive impact for new loans, and thus it would not be relevant to overlays. If it also applies to the latter, it could create an incentive for gaming the system. Layton calls the industry's position completely self-serving but not necessarily wrong. It also comes at a time when the intermediaries are processing huge loan volumes and profitability seems to be at record high levels.

Layton says this is a situation where a proper policy response can reduce overlays to a minimum without requiring unnecessary subsidies from taxpayers. He suggests the following for in-transit loans in forbearance:

Layton suggests the same affirmation of liquidity as above, and these other policy changes for quick-forbearance loans,