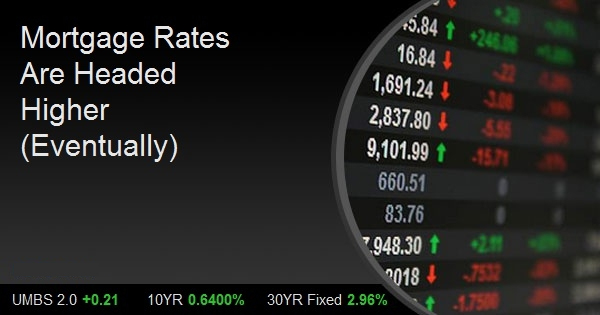 The fates of the economy, the housing market, and interest rates remain closely intertwined with coronavirus.  The pandemic is clearly responsible for the record-setting drop in economic activity (including the housing market). 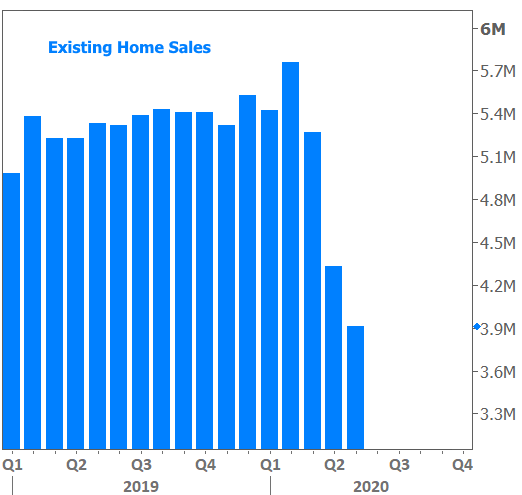 And it has clearly been the key source of motivation for both stocks and interest rates (which we can follow most objectively via 10yr Treasury yields).  A shorter-term chart shows how closely they've been following one another as they digest coronavirus updates. 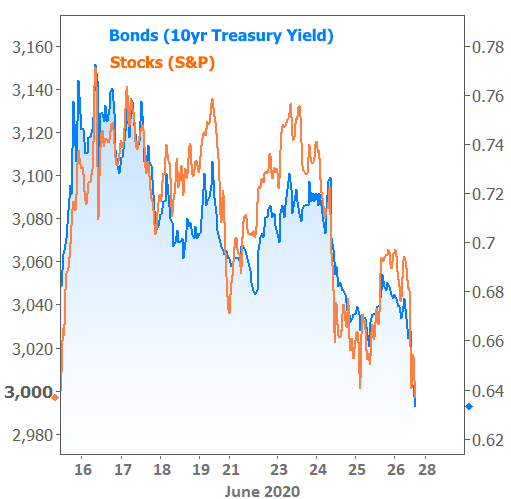 As the initial panic of March and early April subsided, and people began returning to work, it was perfectly reasonable to expect markets and the economy to begin bouncing back (i.e. higher stocks and bond yields).

That is arguably what happened in April and May.  We've even seen several areas of the economy experience their first corrective bounce, such as New Home Sales (note: this chart of New Home Sales looks nothing like the Existing Home Sales chart above because it constitutes a smaller portion of the market, and pertains exclusively to new construction). 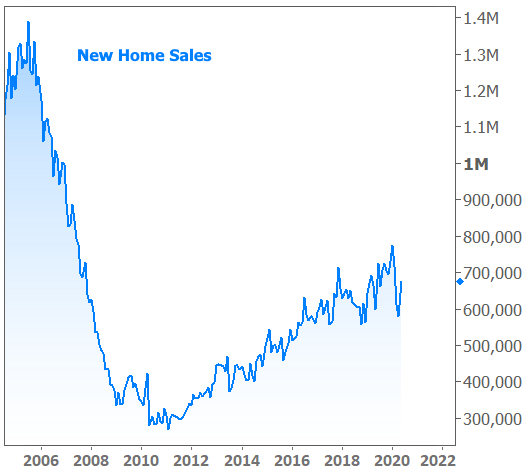 But now the market is having second thoughts due to accelerating case counts (and hospitalizations) in several states.  Stocks and bond yields have been trending lower since topping out in early June. 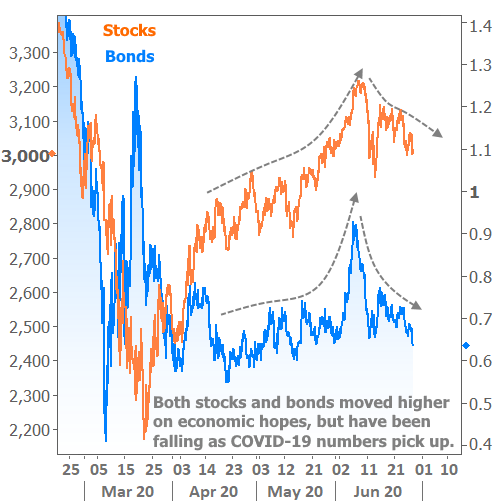 The fate of this market correction will be decided by the course of the pandemic--especially the resurgence of cases in the U.S.  If more people can return to work without hospitals being overwhelmed, the less resistance there will be for interest rates and stocks to move higher.  In fact, it's safe to say that WILL happen.  The question is "when?"

There are other questions too.  Which parts of the market and the economy will bounce back sooner and better?  After all, we've already seen a pronounced difference between mortgage rates and the Treasury yields that typically follow the same trajectory.

A US Treasury Note is a debt instrument just like a mortgage.  The 10yr US Treasury yield is a rate of return just like a mortgage rate.  Historically, the average 30yr fixed mortgage lasts less than 10 years before the home is sold or the mortgage is refinanced.  As such, 10yr Treasury yields should behave similarly to mortgage rates over time as both offer investors a fixed rate of return over a certain period of time. 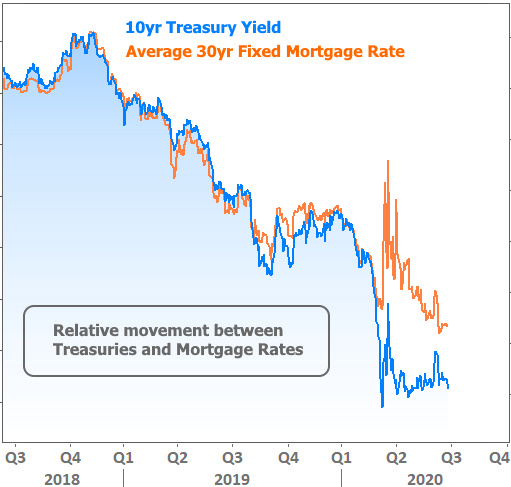 The gap between the two was much wider in April and May.  As the normal relationship slowly returns, mortgage rates will be less capable of defying marching orders from the broader bond market.

In other words, if the market finds a reason for stocks and bond yields to move higher, mortgage rates are increasingly likely to follow.

So will the market find that reason?  Again, we already know THAT it will.  We just don't know WHEN it will.  That answer depends entirely on coronavirus.  What we DO know is that the bond market's movement is similar to that seen during the financial crisis--something we didn't expect to see again so quickly.

That past example suggests some caution.  In early 2009, the economy hadn't even bottomed out yet.  Few were expecting to see rates move higher in any sort of threatening way, but that's exactly what they did.  This speaks to a certain market psychology that spontaneously finds a limit to how much lower rates can go and for how long. 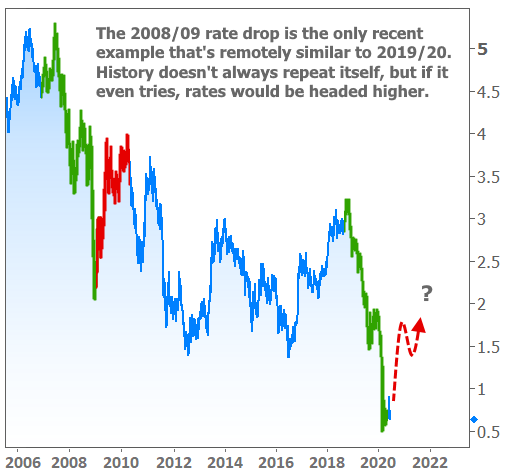 The chart above contains 10yr Treasury yields.  Mortgage rates wouldn't move higher nearly as fast in this unpleasant scenario, but they would still move higher.  To be clear, this is not a prediction.  It is a fact. Rates will move higher.  We just don't know when.  The point is to be ready to react when that happens.  What does readiness look like for you?