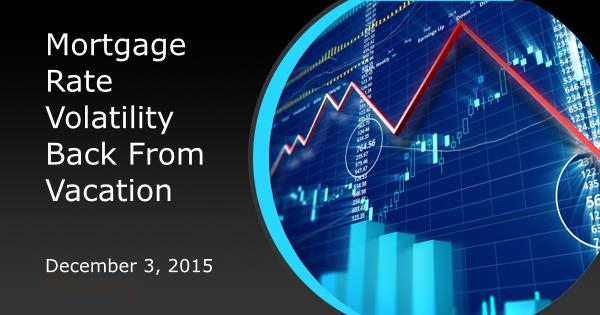 Mortgage Rate Volatility Back From Vacation

For the past several weeks, mortgage rates had been in consolidation mode.  Each new day brought little, if any change to the previous day’s rate sheets.  The days with measurable changes tended to see rates moving slightly lower.   Freddie Mac’s widely-followed mortgage rate survey perfectly captured this “steady to slightly lower” rate movement this morning, showing that the average 30yr fixed rate moved down a gentle 0.02 percent.

Freddie Mac is right about the gentle decline in rates, but keep in mind, that data only covers rate movement through Wednesday (and it tends to line up best with Mon/Tue rate quotes).  Unfortunately, Thursday brought some very big changes.  In fact, it was the single worst day for mortgage rates since mid-2013.

Many lenders ended up a full .125% higher in rate or 1 point higher in cost.  For those lenders it would take an additional $2500 in closing costs to keep yesterday’s interest rate on a $250k loan.

The motivation for the rapid movement will be a matter of great confusion for most people, but I will now arm you to battle that confusion.  The volatility was almost exclusively due to the policy announcement from the European Central Bank (ECB).

Rates in Europe have been drifting calmly lower since June, thus having minimal impact on US rates. But that drift lower is part of deep-seeded concerns about the European economy. As such, investors increasingly saw the ECB upping its stimulus efforts by the end of the year, either by cutting rates or increasing its bond buying program. Today was widely seen as the day the ECB would announce that stimulus. Although they did cut the deposit rate and extend bond buying plans, investors were expecting much bigger changes.

That might sound like insufficient drama to cause such a spike in rates, but keep in mind that the actions of the world’s biggest central banks do more than anything else to move markets.  This is especially true when markets feel blindsided by a particular decision.  When market participants are unexpectedly forced to redefine what they thought they knew about the future of money, they tend to make big trades, and quickly!  While European markets took a much bigger hit from the news, there was more than enough negativity left for US markets.

So Europe is the x-factor here, yet many people will be focusing on Yellen, because she testified before the Joint Economic Committee today.  The best way to look at Yellen’s testimony is to say that it didn’t do anything to counteract the forces set in motion by the ECB.  The Fed is still on track to hike and—if anything—is even more resolved to hike because the ECB news severely weakened the dollar.  The Fed has expressed some reservation about an overly strong dollar being a pitfall associated with the rate hike.  In other words, the ECB did the Fed a favor and dulled that particular consequence to some extent.

To top it all off, we’re heading into the most important piece of economic data on Friday: the Employment Situation.  If it’s strong enough, it will essentially guarantee a rate hike at the December Fed meeting.

That fear undoubtedly greased the skids for today's massive market movement. Bottom line, this is just like the taper tantrum where investors are adjusting to the idea that central banks will be pumping that much less into the financial system.

Pending Home Sales posted their first gain in 3 months.  While that might sound like the last 3 months have been a bummer, they don’t look so bad in the bigger picture. 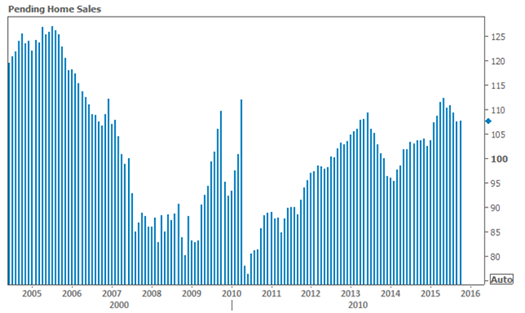 CoreLogic noted that home price gains accelerated in October after lagging in September.  Appreciation is nearly 7 percent on average with several markets near or above 10 percent.

Construction Spending came in higher than forecast, with a strong 1.0 percent month-over-month gain.  The cumulative annual rate for private residential construction looks even better, as seen in the 2nd chart below. 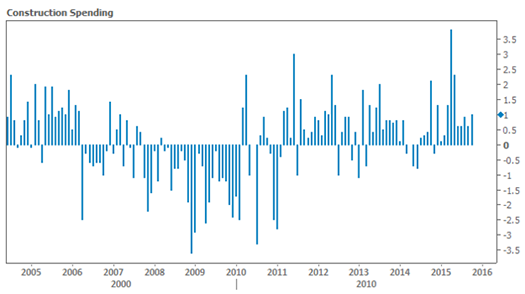 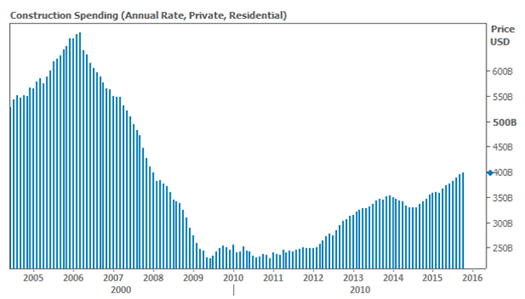