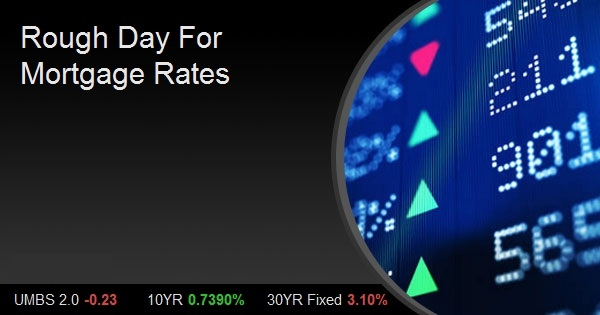 Mortgage rates were decisively higher today as the bond market lost ground due to surprisingly strong economic data.  Mortgage rate movement is mainly a factor of mortgage bond prices.  In turn, mortgage bonds tend to move in broadly the same direction as the US Treasury market.  That's why so many people think mortgage rates are based on 10yr Treasury yields.

It wouldn't matter either way today as both mortgage bonds and Treasuries lost ground quickly after several economic reports came out much stronger than expected.  Taken together, the reports (which still suggest the economy is heavily affected by covid-related shutdowns) point to an economic recovery that may be underway sooner and in healthier fashion than economists expected.

Part of the reason rates have been as low as they are is the fact that bonds tend to improve when the economic outlook is gloomy.  If today's data is a sign of the times, the bond market (aka "rates") is forced to ask itself if it has been a bit TOO gloomy, perhaps.  To whatever extent additional data votes "yes," rates could continue to see upward pressure.  Tomorrow's Jobless Claims report definitely has a vote, but Friday's big jobs report could do even more exacerbate or mitigate this troubling new trend for rates.

For what it's worth "decisively higher" mortgage rates should be put in context.  We're still talking about the average lender being very close to all-time lows (think 30yr fixed rates in the low 3% range).  Even in day over day terms, the worst case scenario would be a 0.125% increase for the average 30yr fixed scenario.