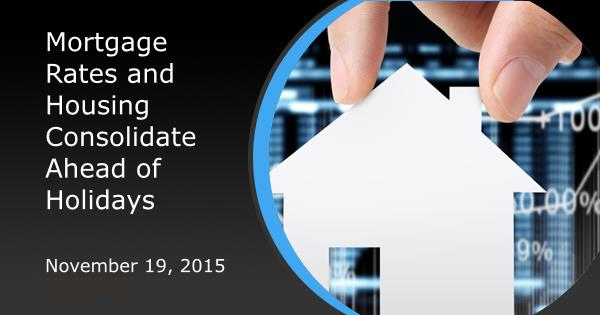 Mortgage Rates and Housing Consolidate Ahead of Holidays

The notion of consolidation is ubiquitous in both the natural and financial world.  With respect to housing markets and mortgage rates, consolidation refers to a pause in recent movement—a ‘leveling-off.’  It can be the result of a trend that has simply run out of steam, or it can be a way for markets to batten down the hatches ahead of an expected storm.

Given that financial markets like liquidity (an ample supply of interested buyers and sellers) the Thanksgiving holiday week begins a storm, of sorts, that typically results in consolidation.  Incidentally, all bets are off during the storm itself (essentially next week through the New Year), but on the approach, markets tend to consolidate.

This year is no exception as bond markets began taking a break from their recent run toward higher rates this week (i.e. rates moved a bit lower).  In the true spirit of consolidation, rates also haven’t been eager to move back below their most recent plateau seen just before the last jobs report.  They’ve merely cooled off and are now considering their next move.  The terror attacks in Paris and this week’s release of the Minutes from the last Fed meeting only increased motivation for a cautionary pause.

When it comes to consolidation in housing markets, we’re dealing with a much longer time scale.  Housing data has been generally improving throughout the recovery, but is finally showing signs of leveling off—at least in some sectors.  It’s too soon to definitively tell if this is part of the normal seasonal pull-back that follows the summer buying season, but some year-over-year numbers raise that concern.

Particularly, a recent Redfin report suggests that housing slowed down more than typical seasonality would suggest in October.  Housing Starts also lost ground due to a big slow-down in multi-family construction.  The net effect was the first year-over-year decline since March.

Elsewhere, the housing news is more balanced.  For instance, even as builder confidence pulled back sharply this month, it remains in a general uptrend, and well above last year’s levels.

FHA announced a much improved outlook in its financial strength, reaching its capital ratio goal more than a year ahead of its goal.  There has been some speculation that this could affect mortgage insurance premiums (MIPs) in the future.  At the very least, it should help ensure stable MIPs for the foreseeable future.