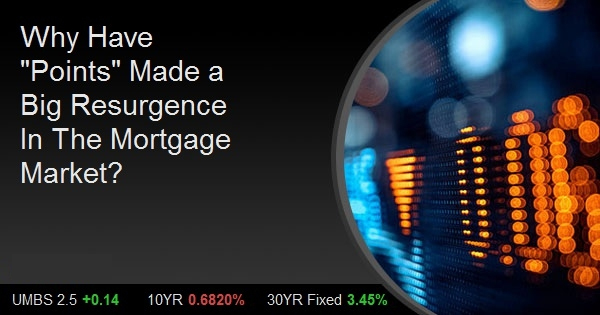 Why Have "Points" Made a Big Resurgence In The Mortgage Market?

The most important ingredient in the mortgage market is the presence of homeowners--prospective or otherwise--with the means and desire to make monthly payments.  That fact invites investors to earn solid, predictable returns with almost no risk.  After all, most of the mortgage market is comprised of loans that guarantee that an investor will get their principal and interest back.  The only real risk is a temporary interruption in cash flow or a premature sale/refi that results in the investor being unable to collect interest for as long as they'd hoped.

The industry term for such a premature sale/refi (or anything else that terminates the loan, like a foreclosure or short sale) is "prepayment."  Because of the guarantees from the agencies (Fannie/Freddie/Ginnie), prepayments account for most of the risk that mortgage investors consider when deciding how much to pay for any given loan.

There's no equivalent industry term for other interruptions in cash flow because the system is designed in such a way that it's essentially never a risk.  It only happened in a notable way to the current system in 2008 when Treasury was forced to recapitalize Fannie and Freddie.

Under the recent CARES Act, homeowners have the ability to request a payment moratorium for up to 12 months due to coronavirus-related hardship.  Interestingly, homeowners don't have to document the hardship and their mortgage companies can't force them to.  Officials have no idea how much of the housing market will pull the trigger on this.  There are downsides for homeowners, to be sure (potential credit impact event though it's not supposed to be reported negatively, as well as potential difficulty obtaining another loan in the future or refinancing the existing loan due to the absence of payment history).  But despite the downsides, it wouldn't take an especially huge portion of the housing market pulling the trigger in order to run mortgage companies and the agencies out of cash.

If that happens, although mortgage investors would still ultimately get the interest and principal that were entitled to, they would miss out on collecting it for months.  In the world of finance, "time value of money" suggests that's not a smart risk for those investors to take.  SO THEY'RE NOT TAKING IT!  At least not nearly as aggressively as normal.  The more risky aspects a potential loan contains, the less of a premium mortgage investors are willing to pay.

Between low rates creating the risk of premature refis and the CARES Act creating cash flow risks, mortgage investors simply aren't paying premiums for the loans that typically command them.

This is most easily seen in loans with riskier features (lower credit scores, higher loan-to-value ratios, lower income, or non-owner occupancy aka "investment property").  Such features result in adjustments or "hits" to loan pricing.  In other words, they create extra costs that can either be paid upfront with closing costs or over time via higher rates.  These costs are the same thing as the extra compensation the investor is seeking for taking additional risk.

Now let's put that all together with the risks we just discussed.  If an emergent financial situation could result in a homeowner rapidly selling or refinancing, OR if a forbearance situation could prevent the investor from receiving timely payments, why in the world would that investor want to leave the homeowner the option of taking the higher rate and paying the extra costs over time?  It would be much MUCH safer for the investor to grab the desired compensation upfront.

This means prospective borrowers are not currently able to offset many additional upfront costs by opting for a higher rate.  In other words, you could normally bump your rate up in order to get the investor to pay more for your loan--something you might do to cover the 2.125 point hit for an investment property.  In the past, this would look something like a 0.5% increase in your interest rate being worth at least 2.125 points in terms of upfront costs.

But right now, that extra 2.125 points is going to require an interest rate bump of closer to a full 1.0%, if it's available at all.  Many investors aren't even including that pricing availability.  Moreover, 2.125 points is merely the hit required by Fannie and Freddie.   They're just guaranteeing the loan.  Investors frequently tack on their own hits in areas where they see the most risk (or the areas that will give them more trouble when it comes time to sell or servicer your loan).

The bottom line is that POINTS (or simply extra upfront origination cost) have seen a resurgence because they're the only reasonable way to pay for the extra costs associated with some types of loans.  Some people hate the idea of points, but given the current state of the mortgage market (it's a mess), be thankful you have the option at all.  Your situation would be far from uncommon if the loan you're considering today was completely unavailable tomorrow.