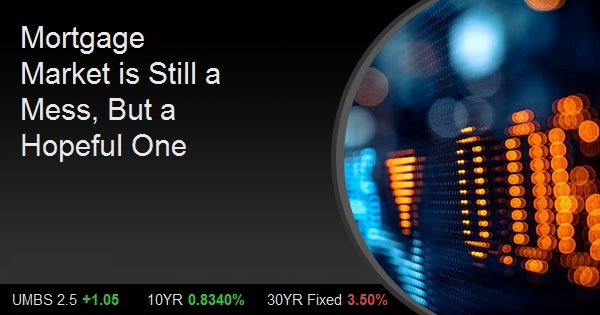 Mortgage Market is Still a Mess, But a Hopeful One

There is a LOT of misinformation flying around out there about the mortgage market, the Fed, and the various impacts on rates from the government's coronavirus response.  If you're in the market for big-picture overviews of all the relevant considerations with links to excruciating levels of technical detail, check out this compendium of the Fed's current mortgage bond buying efforts. If you're just here to find out what the heck is going on with mortgage rates, read on.

Rates are legitimately all over the place in a way we haven't seen, ever.  I'm including a significant amount of personal experience analyzing the financial crisis and more than a careless amount of research into historically similar levels of volatility as seen in April 1987.  March 2020 wins, period.  The sudden, unexpected, massive economic shift associated with the most serious global pandemic of our lifetimes is a big deal.  Could we say that the Spanish Flu or Great Depression were bigger deals?  Sure, maybe.  But those events happened in a different world.  In fact, the rise of the internet and rampant globalization of the economy in the 90's arguably makes even 1987 a poor comparison (and yes, I know there technically was internet back then, but were you able to liquidate your 401k from your cell phone's mobile app after reading a coronavirus headline in the bathroom in 1987?  Like I said... different world).

All that is beside the point.  It doesn't matter which bout of market mayhem is the biggest.  The current iteration in inexplicably massive and it's caused the most massive impact on the mortgage rate landscape we've seen in our lifetimes.  Granted, it could also be one of the most temporary, but for now, it's ongoing.

One thing I want to address that I've heard internet trolls complain about is some sense of government collusion in setting your mortgage rates.  The government doesn't do this.  If anything, your rates are much lower than they otherwise would be due to the way the government participates in the mortgage market.  If you want to blame the government (or praise them) for your view on the crisis response and then connect the dots between market volatility and mortgage rates, feel free to do the former on your own time.  I'm just here to talk about the latter.  In other words, what is the issue with market volatility and mortgage rates?

In many ways, this is a brave(scared) new world.  Investors in multiple sectors of the bond market (which determines mortgage rates) have run for the exits.  They do this by selling their bond holdings.  When they sell bond holdings, it puts upward pressure on rates.  The Fed stepped in to make sure there was plenty of cash and a willing buyer for all that debt.  The Fed will earn a rate of return on that and the return will be remitted to the American taxpayer.  The Fed could lose money on that investment too, but the point is that they're not just handing out $700bln in free money to fat cat corporations that are turning around and gouging defenseless mortgage borrowers.  If anything, the only reason anyone can get a mortgage this week is because of the Fed's efforts to ensure liquidity.  Thank you Fed.

Don't get me wrong, I could find fault with the Fed's intervention efforts in the mortgage market (mostly their past efforts during the recovery when they arguably could have divorced themselves from their role as "buyer-in-chief" of mortgages more quickly), but in the current case, they've done exactly what they needed to do in order to prevent far more chaos.

As such, the chaos that we're seeing on lender rate sheets is simply what's left over AFTER the Fed has acted to make things much much better than they otherwise would be.  So what are the net effects?

All of these dramatic highlights are understandable and normal given the dash for cash among investors and the nature of the secondary mortgage market.  It's also a given that things will eventually settle down, but as has been and continues to be the case, it will take time and stability in the bond market.  Time, we know we'll have.  Stability will require the broader financial market to get its bearings with respect to coronavirus and the associated economic impacts.  That, incidentally, will also take time, and maybe a little bit of luck and skill on the part of market participants, policymakers, and american/world citizens staying healthy.  No matter what, whereas this would be nothing but frustrating with respect to mortgage rates, thanks to the Fed, we at least have some hope this week.