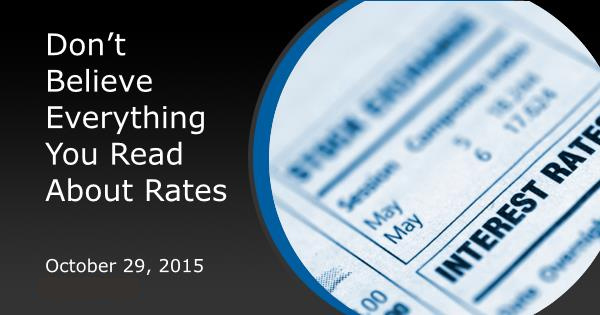 Don’t Believe Everything You Read About Rates

For decades now, Freddie Mac has been publishing its weekly Primary Mortgage Market Survey, which has become the definitive benchmark for mortgage rates. It’s used not only by the secondary mortgage market to compare average rates to other sectors of the bond market, but also by just about every major media outlet.

That means Freddie sends out a press release on Thursday morning and within an hour or two, hundreds of websites as well as the big news networks are using slightly different words to say whatever Freddie just said. Chances are, if you see or hear news about rates going up or down, this is the source, and that’s terribly unfortunate.

It’s not unfortunate because the data is bad. Actually, the data is quite good—every bit as definitive as its prolific spread would suggest. The problem is that most of the audience that consumes the data does NOT understand exactly what it means. When we see headlines like:

But we’d all be very wrong.

Freddie’s data—while perfectly accurate—is based on survey responses that arrive mostly on Mondays and Tuesdays.  Furthermore, the Freddie survey never includes Thursday or Friday rates.  Freddie’s goal is NOT to serve as the fodder for all of the misleading headlines above.  Its goal is simple to capture the week over week movement in rates in the long run.

Unfortunately, the media leans on the release as a timely update on rates.  This creates confusion when consumers tell their mortgage brokers “hey, I heard rates went down this week!”—especially on a day like today when mortgage rates are as high as they’ve been in a month!

Again, keep in mind that Freddie averages the 3 days of survey responses and that most are in by Tuesday.  Then consider that the Fed announcement occurs on Wednesday afternoon.  It’s a perfect recipe for a very misleading mortgage rate headline as the Fed comes in to potentially create significant movement in rates RIGHT as the movement in rates will no longer be captured in Freddie’s data—at least not until the following week.

This week’s Fed announcement was a classic example.  The Fed surprised more than a few market participants by getting rid of their recently-added warning on global financial developments and by specifically mentioning a potential rate hike at the next meeting.  While mortgage rates won’t necessarily be swayed in the long run, there tends to be short term correlation between rates and Fed rate hike prospects.  Since this announcement greatly accelerated rate hike odds, rates have jumped over the past 2 days.  If someone tells you otherwise, quoting one of the many Freddie-inspired headlines, please let them know as nicely as you can.

In addition to the somewhat precipitous changes in rates, this week also provided some abrupt changes in Housing Data.  Most notably, New Home Sales tumbled 11.5 percent.  Analysts had been expecting a relatively flat reading.  Combined with a significant revision to the previous month, this brings New Home Sales back in line with a flat trend for the year.

In a similar vein, Pending Home Sales unexpectedly fell 2.3 percent versus a median forecast calling for a 1.0 percent gain. These are notable reversals considering the topic of last week’s newsletter was the strong performance of housing data relative to the rest of the economy. 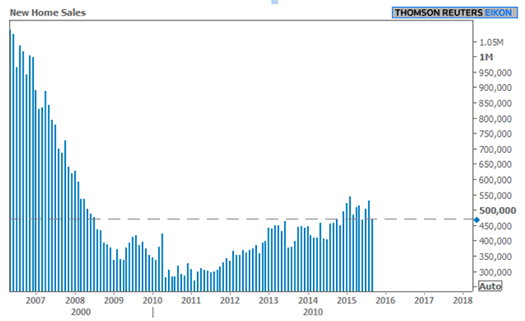