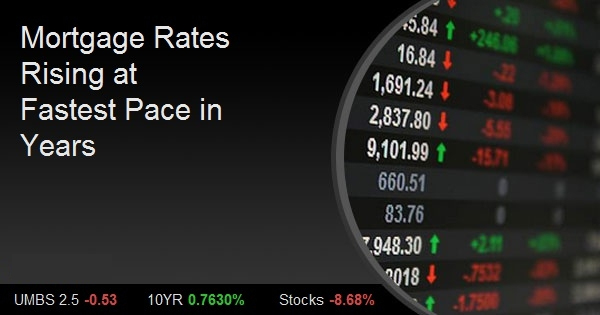 Mortgage rates continued a relentless surge higher today.  The move began in earnest yesterday for two key reasons: bond market panic and mortgage market over-supply.  If you take nothing else away from the following, the important part to understand is that rates are absolutely significantly higher than they were this morning, yesterday, and on Monday morning.  The pace of that move has been the fastest since the 2 days following the 2016 presidential election, and one of only a handful of 2-day periods with more than a 3/8ths bump to the conventional 30yr fixed rate.

The bond market panic is the logical ingredient.  Rates--especially those in US 10yr Treasuries, which do NOT directly translate to the mortgage market--fell precipitously to new all-time lows as of Monday morning.  They've since bounced fairly hard.  Although the bonds that underlie mortgage rates weren't able to keep up with the move in Treasuries, they were generally moving in the same direction until that reversal.  Since then, they've been forced back toward weaker levels.

But it's really not the mortgage-backed-securities market that poses the key issue for mortgage rates right now.  It's the mortgage market's over-supply.  Like anything else, a rampant excess of supply puts downward pressure on prices.  When we're talking about bonds or mortgages, lower prices mean higher rates and it's really that simple.  The investors that ultimately buy the mortgage debt create by new refinances have been so overwhelmed with the available supply on the market that sellers have desperately lowered prices in order to find buyers.  And again, lower prices on mortgage debt mean higher rates for consumers.

As an example of just how intense the ramp in supply has been, consider that today's report on new refinance applications showed the biggest week-over-week jump... EVER!  And I guarantee you Monday's volume of new business was every bit as high as the busiest day from last week.

Will this end?  Yes.  But it will take time.  There are also 2 parts to the equation.  Volatility is one consideration.  The sooner the underlying bond market finds a narrower trading range, the easier it will be for the mortgage market to begin settling down.  The other consideration is the outright level of rates and new business.  This is already in the process of taking care of itself.  To be sure, once lenders have slowed down due to the massively higher rates, they'll lower margins as much as the price of mortgage bonds allows in order to drive new business.  Either way, we're not talking about quick fixes.