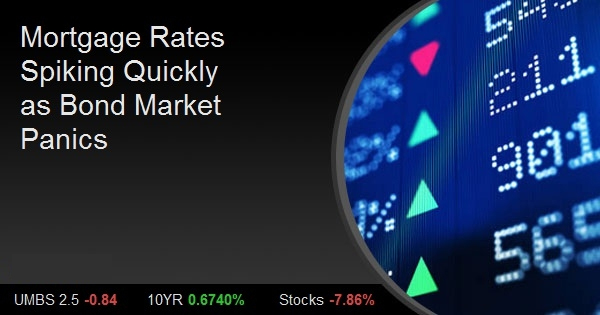 Mortgage rates have exploded higher over the past day and a half as the bond market sends threatening signals about a big picture bounce off the recent lows.  This is made all the more jarring by the timing and the scope of the movement, as well as the circumstances surrounding it. What does that mean?  First off, the scope is huge, considering the 10yr Treasury yield (the most widely cited benchmark for the bonds that underlie mortgage rates) hit 0.318% late Sunday night.  While the 10yr doesn't dictate mortgage rates, its movement speaks to the general momentum for all longer-term rates in the US.  0.318% was more than 1.0% below the previous all-time low seen in 2016, and it only took 8 business days to cover that entire 1.0%.

The drop in Treasury yields coincided with decent pricing in the mortgage-backed-securities (MBS) that underlie mortgage rates, which in turn allowed lenders to offer all-time low mortgage rates at some point in the past several business days.  For many, it was first thing Monday morning.  For others, it was in the previous week.  Either way, the average lender has been at or near all time lows on a few occasions over the past 6 business days.

This is why the move is jarring.  From all-time lows early yesterday morning, rates have moved up to the highest levels in more than a week for most lenders.  The average lender had been able to quote rates as low as 3.125% during the best few hours, but they're now back up in the 3.375% neighborhood.

How could mortgage rates be 3.375% if they were also 3.375% in 2012 and 2016 (years when 10yr Treasury yields only managed to make it into the 1.3% range)?  Therein lies the caveat of Treasuries guiding rate momentum but not directly dictating outright levels in mortgages.  MBS have their own set of concerns brought about by the pace of the move.  The short version of the story is that volatility costs money for mortgage lenders.  The longer version would involve a discussion about overly-quick drops in rates prompting homeowners to refinance loans only recently acquired.  When that happens, it costs mortgage investors money in lost interest payments.  Investors then pay less for the same type of mortgages.  Lower investor demand results in lower MBS prices and higher mortgage rates, all other things being equal.

But all other things aren't equal.  Lenders have been so incredibly slammed with business that they've either turned it away outright or simply raised their rates high enough to send the message: find someone else to do your loan.  On a final, rather complex note, many lenders are beholden to the requirements of their own creditors (even though the lender is a creditor as far as the mortgage borrower is concerned).  Due to market volatility, those creditors are not only running low on funds in some cases, they're also requiring or suggesting that lenders set bigger margins on new business right now.  In other words, if your rate would have been 3.125% in a calm market environment at current MBS levels, it's 3.375% today.

One last thing to keep in mind when we talk about the lowest available rates: this WILL NOT apply to every scenario.  In fact, it ONLY applies to the best scenarios (25%+ equity, 760+ credit, single-family, owner occupied homes).  Once you start looking at rates for less than perfect scenarios, things get ugly quick.  That has to do with the higher mortgage rates being VERY poorly priced because investors are REALLY scared about how quickly they could be paid off in this environment.  And again, the less an investor wants to buy the underlying mortgage debt, the higher your rate is going to be.

Above all this at a longer-term, conceptual level.  A bounce of the size seen in the bond market today begs the question of whether or not the coronavirus-induced rate drop (and stock sell-off) is over.  If anyone knew how that future would play out, rest-assured, you'd have seen much bigger market movement today.  Things can still go either way for a variety of reasons.  Certainly, the risk of a bounce has been raised, but we'd need to see much more bond market weakness (i.e. higher Treasury yields) to confirm it.  That could lead to a dicey, stressful couple of days as there are two Treasury auctions to content with (tomorrow and Thursday).  If the bond market hasn't totally given up by then, we're more likely to get a clearer sense of where we stand by the end of the week.