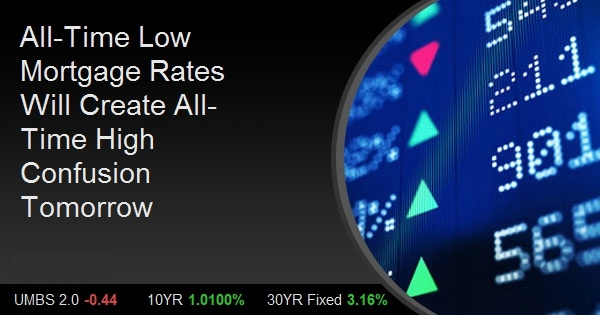 Mortgage rates have progressively hit newer and lower all time lows every day this week, but there's one massive catch.  Rates and fees have been extraordinarily different depending on the lender.  Some are offering conventional 30yr fixed rates that are as high as 3.5%--even for top tier qualifications.  On the other side of the spectrum, more than a few lenders are quoting 2.875% for the same scenarios.  The average lender is somewhere in between, but that average is nonetheless an all-time low.

There's actually one other catch emerging as of this afternoon.  Those were the rates as of this morning.  Markets began to move in the other direction as the day progressed and multiple lenders pulled back their all-time low rate offerings.  We asked whether a similar pull-back was the beginning of the end of low rates on Monday afternoon.  We concluded that it wasn't (probably).  I would echo that sentiment, but should clarify that this time could be a bit different.

To be sure, rates will still be extremely low tomorrow.  In fact, they could turn right back around and improve again.  But each time this afternoon market drama crops up, risks increase that rates are finding a bottom in the bigger picture.  If that's the case, it's not the end of the world.  You'd still have time to take advantage of the opportunity.  The bigger question would be how long it would take for a meaningful move back toward higher levels.  For that, we'll have to see how the global response to coronavirus news evolves.  At some point in the coming weeks or months, we're going to blink and coronavirus will suddenly no longer be a part of our daily dialogue.  The sooner that happens, the sooner these rates will be a fond memory--at least until the next major bout of drama sends markets on a similarly wild ride.

But let's say rates continue higher tomorrow.  In that case, massive confusion and angst are in the cards.  Reason being: Freddie Mac's weekly rate survey is released, and it is unfortunately fueled by data collected mostly on Monday and Tuesday.  For many lenders, those were the two best days of this week.  They were also the two worst days of last week.  That means Freddie's numbers are set to show a huge drop in rates.

News organizations will pick up that press release and run Thursday headlines exclaiming "all-time low mortgage rates" as if it's something that happened on Thursday!  With a huge number of borrowers currently in the loan process, this will make for massive amounts of confusion when they call their loan officers and say "hey, I heard rates just went lower today!"  Combine that with the vastly misunderstood Fed rate cut yesterday, and it's safe to say confusion is just as high as rates are low.

READ MORE: Rates at All-Time Lows No Thanks to Fed's Emergency Cut