2015 was supposed to be the year of rising rates.  Even as recently as this past week, several articles mentioned a high level of consensus about rates moving higher.  The problem being is that this has been the consensus since the middle of 2013!

The failure of this consensus is due to the general paradigm about how low rates SHOULD be.    As you’ve likely been told in a number of clever ways, “should” can be a dangerous word.  Almost everyone thought rates SHOULD have moved higher even after the taper tantrum in mid-2013.  And now we’re hearing the same sort of consensus about how rates SHOULD move higher in 2015. 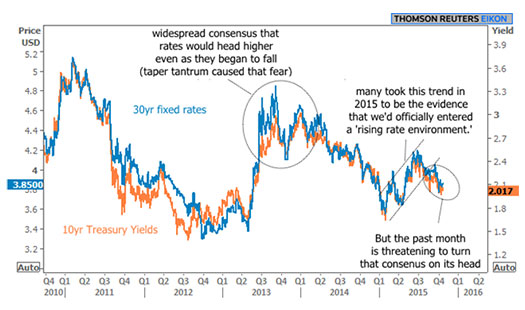 It’s seen as some sort of reckless notion that 10yr yields could stay near or below 2% or that mortgage rates could be in the 3’s.  Such rates are still widely associated with the wilder times that prevailed from 2011 through the middle of 2013.  The paradigm is that they’re no longer justified because the Fed is not buying bonds anymore and is furthermore considering raising its policy rate.

Unfortunately for the “shoulda’s,” rates will always be determined by the supply and demand in bond markets.  Supply is a non-issue most of the time.  Demand is the component that’s tripping people up.  It’s created by a number of things, but the three biggest drivers are inflation expectations, the economic outlook, and central bank buying programs.

As we know, the tapering of central bank buying took a toll on rates, but it didn’t change the other two considerations.  While the economy has improved in many ways, it has a few key issues that continue to support lower rates.   The biggest issue is the utter lack of inflation.  While the Fed reckons that inflation will pick back up if oil prices rise, they don’t seem overly confident about that, as evidenced by their ongoing refusal to do anything but TALK about raising rates.

The reality (and the second key issue) is that there is simply a growing concern about the level of global economic growth.  Interest rates will generally follow the trends in growth, which is why rates have fallen over the past 3 months as overseas concerns have increased.  Even some of the domestic economic data has taken a turn for the worse recently.  Housing data is one of the most notable exceptions.

This week has been housing-heavy in terms of data, with Builder Confidence leading the charge.  The NAHB Housing Market Index officially re-entered territory not seen since before the housing crisis began. 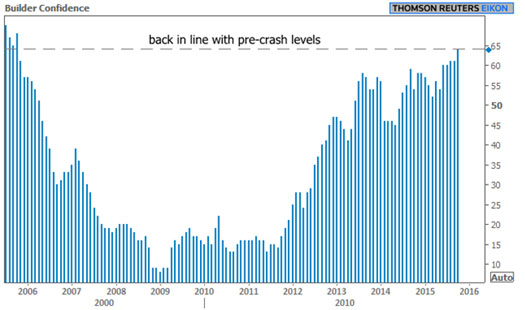 The rest of the week’s housing data can’t quite make the same lofty claims, but it’s by no means been depressing. Housing Starts may not be back at late 2005 levels, but they’re nonetheless pushing their post-crisis highs (the caveat is that Multi-Family construction played a major role). 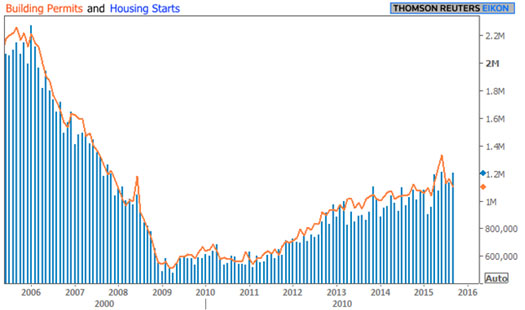 Finally, Existing Home Sales rose to an annual pace of 5.55 million units versus a median forecast of 5.38 mln and a previous reading of 5.30mln. 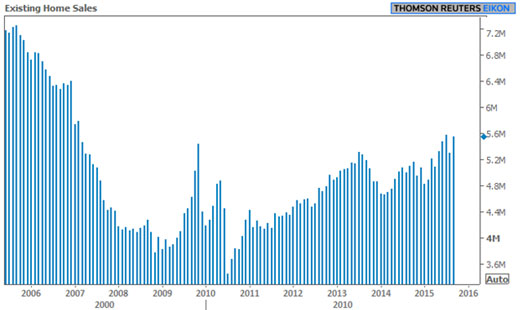 The upcoming week brings the much-anticipated October FOMC Announcement.  There is absolutely no chance that the Fed raises rates at this meeting, but there is still some small chance that they hike in December.  If they’re actively considering that, we could expect the October Announcement to hold some clues.  This could make for significant market volatility on Wednesday afternoon and into Thursday.

Regardless of the Fed Announcement, keep in mind that rates can always move higher or lower, and sometimes they move higher simply because they've had their fill of moving lower for the time being. So for those with shorter-term time horizons, it can often make sense to look for opportunities to lock when rates are at multi-month lows.