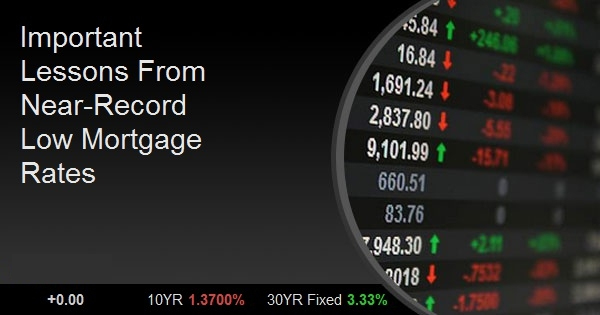 Mortgage rates continue to carve out the unlikeliest of victories in 2020 with significant help from coronavirus.  The epidemic has taken a year that was almost certain to start off with a steady move toward higher rates and turned it into one of the strongest starts on record.  In fact, when it comes to the combination of ground covered and levels achieved, no other year has started off any better.

Other years have seen a similarly big drop in rates during Jan/Feb, but there aren't many.  Of those years, 2016 was the only one to remotely match the rates we're currently seeing.  Unless tragedy strikes the mortgage world by the end of this week, 2020's late February rates will be roughly 0.25% lower than they were in 2016.

But rates ultimately did move lower in 2016 after the Brexit vote in late June.  Several lenders approached all-time lows by early July and US Treasury yields actually hit all-time lows.  That post-Brexit drop in rates is now the only feature of 2016 that 2020 has yet to surpass.  Even then, the average lender matched those rates today!  In short, that means today's rates are the lowest they've been in nearly 4 years.  Before that, you'd have to go back to 2012 to see anything lower, and it wouldn't be much lower.

Therein lies a VERY important lesson from history.  At no time in modern economic memory have mortgage rates been able to move significantly or aggressively lower than they are right now.  Sure, if the stars align as they did in 2012 (which I've often referred to as the Golden Era of Low Rates) we could squeeze out another 0.125% of a point, but the clearest part of the lesson is that a bounce is coming.  It could happen tomorrow.  It could take a week.  It could take more than a month, but it is coming.  Could we then move back in the other direction and ultimately go on to set new record lows for mortgage rates?  Absolutely, but until and unless that happens, the available historical lessons suggest that, for those who would benefit from refinancing, it's far easier to screw up this opportunity by waiting too long than by acting too quickly at this stage in the game.  I would not and could not have said the same a month ago.

Corona virus contagion fears boosted bonds and sank stocks Monday, as global outbreaks continued to pop up.  Bond yields are nearing all time lows, but my pricing has improved minimally so far.  I'll be floating until rate sheets reflect far more of bonds' gains.  It's not unusual in cases like this for rates to lag, just kind of discouraging when it happens. - Ted Rood, Senior Originator