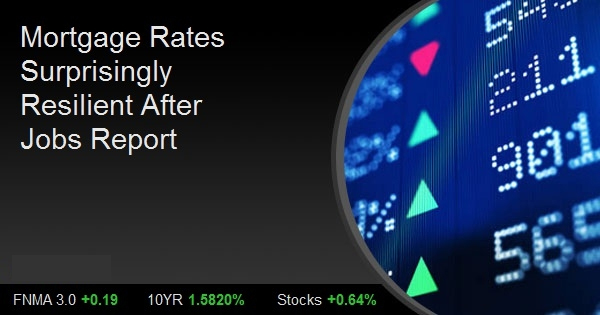 Mortgage rates completely defied the odds.  They even defied convention.  Specifically, they managed to move appreciably lower even though today's big jobs report basically told them not to.

This is a big deal for several reasons. The jobs report is historically the most important economic report on any given month as far as interest rates are concerned.  Granted, it's had a bit less impact than normal recently due to the persistently strong readings (i.e. solid job creation is old news), but rates have nonetheless been willing to move in a logical direction when the reports have been much stronger or weaker than normal.

So why didn't they do that today? The bottom line is that the US jobs market is not a big risk, nor a big driver of growth for the global economy.  China, on the other hand, is front and center at the moment, and experts agree the Chinese economy will take a big hit from coronavirus-related issues.  There was some hope earlier in the week that the markets had turned a corner with respect to the outbreak, but today proved that uncertainty continues to be the safest bet.  Long story short, when investors are defending against uncertainty, they often buy bonds.  This, in turn, pushes rates lower.

It remains to be seen if this is just defensive positioning ahead of a weekend or if we're about to see another deterioration in the coronavirus outlook next week.  In the meantime, long-term low mortgage rates will enjoy some more staying power.

Bonds rallied Friday, despite a relatively robust NFP jobs report.  While it's far too early to pronounce this a trend, it's refreshing to see rates near their recent lows.  I don't know how much more room there is for further drops, so will still be conservative on locking.  One in the hand beats two in the bush. - Ted Rood, Senior Originator