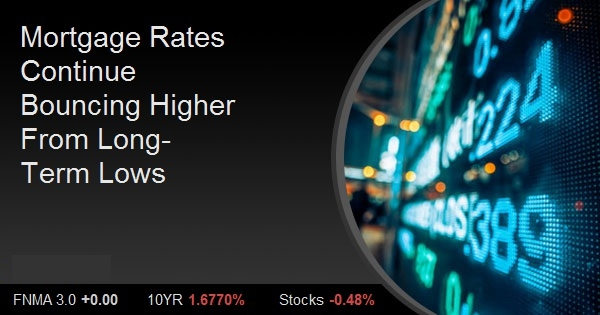 Mortgage rates moved higher again today as investors reacted to updates about the coronavirus outbreak.  This has been the dominant motivation for the big drop in rates over the past 3 weeks.  Mortgage rates are determined by the bond market.  When investors are worried about some negative impact on the global economy, bonds provide a safe haven to defend against risk and volatility.  Excess demand for bonds pushes rates lower.  As such, all the panic over coronavirus logically resulted in lower rates, but as of this week, things may be changing.

While there are still plenty of reasons to be concerned, the news cycle surrounding the outbreak has officially entered the "glimmer of hope" phase.  For example, a pharmaceutical company in China announced that it received approval to begin treating the virus with a cocktail of potent antiviral drugs.  The market treated that news as if a cure had been announced.  Stocks surged back toward all-time highs and bonds continued giving up recent gains.

As far as the average mortgage lender is concerned, we've seen the conventional 30yr fixed rate on top tier scenarios move up by about an eighth of a percent (.125%) over the past 2 days. That said, back on Monday morning, 3.375% was arguably the most prevalent top-tier quote.  In that light, a move up to 3.5% is far from the end of the world--especially when rates had been even higher than that for more than 3 months (not to mention, rarely under those levels... ever!).  More important than the outright level, however, is the fact that recent weakness could signal a shift in momentum--one that would make 3.5% look like a stellar deal several days or weeks from now.