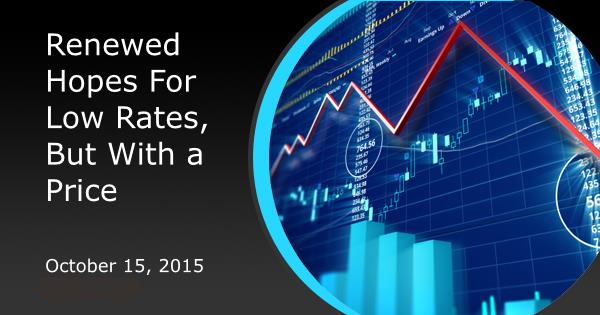 Renewed Hopes For Low Rates, But With a Price

If you’re in a position to hope for rates to move lower, you unavoidably become a fan of some fairly morbid economic developments. Rates move lower when the price of bonds moves higher, and bonds are the quintessential safe-haven for investors.

For instance, if economic data or geopolitical headlines suggest tough times for the economy or big risks for the countries that make up the global financial system, investors may well want to stash their cash in something with a lower, but more predictable rate of return. As far as low, predictable rates of return go, it’s hard to beat the bond market.

While concerns over the global economy have been increasing, they’ve been offset by relatively stronger readings on the US economy as well as a steady stream of rhetoric from the Fed. In other words, the international picture might motivate investors to buy more bonds (thus pushing rates lower), but the domestic picture and Fed policy had the opposite effect.

That may be starting to change.

This past week, we’ve received additional economic data that suggests the US economy is, in fact, being dragged down by the global malaise. Particularly, Retail Sales continue to be weak and producer level inflation dropped significantly (inflation has negative connotations in general, but in the current environment, the Fed would view it as a sign of an improving economy).

As investors consider the risk that the US economy is facing a big-picture shift, we’ve been seeing that classic example of ‘safe-haven’ strategy. This means that stocks have been lower and bonds have improved (which, again, means lower rates). In fact, rates hit new 5-month lows this week just as stocks struggled to break back above a ceiling that’s been intact since late August.

This ceiling bears close watching. Using the S&P 500 as an example, it would be 2023, which can be seen as the flat line on the chart below. As stocks continue to flirt with that ceiling—but avoid breaking—rates have increasingly moved lower. 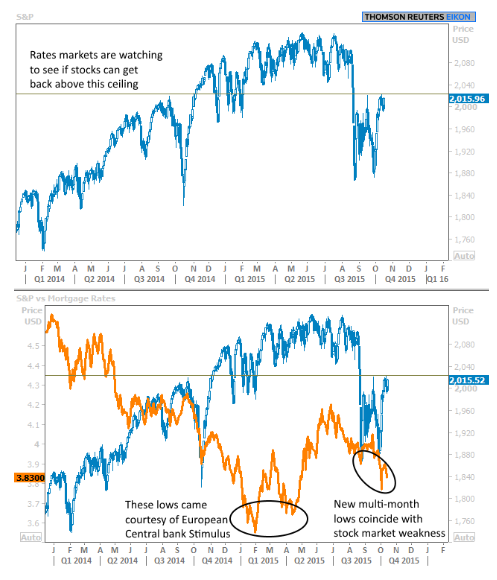 This situation will continue to play out IF the data continues to disappoint. The risk is that some economic reports come out in the next few weeks that help sooth investors’ anxiety. That could be all it takes for stocks to break the ceiling and for expectations for rates to get back to doing what many thought they would be doing in 2015 (move higher). If that happens, the move higher in rates would be
abrupt and decisive.

If it doesn’t happen, the move lower in rates would be slower, and more volatile. Adjust accordingly when it comes to locking and floating. Bottom line: look for opportunities to lock at periodic lows. If low rate fans end up getting their wish, there will be plenty of justification to refinance at even lower rates next year).