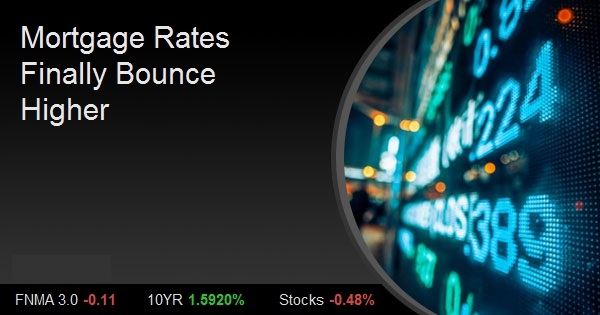 Mortgage rates have been on a tear recently.  The average lender has either held rates steady or improved them every single day since January 16th.  Some of those improvements have been substantial, ultimately resulting in the lowest rates in more than 3 years as of the past 2 business days.  Today, however, finally brought an end to the winning streak with the first meaningful move back in the other direction.

"Meaningful" may not be too meaningful depending upon how closely you're following rate movements.  The average lender is still easily able to offer conventional 30yr fixed rates of 3.5% on top tier scenarios.  The bigger issue is merely the risk that today marks some sort of turning point in the bigger picture.  It's too soon to know if that's what this is, but it's definitely the first obvious candidate since the coronavirus rate-drop began.