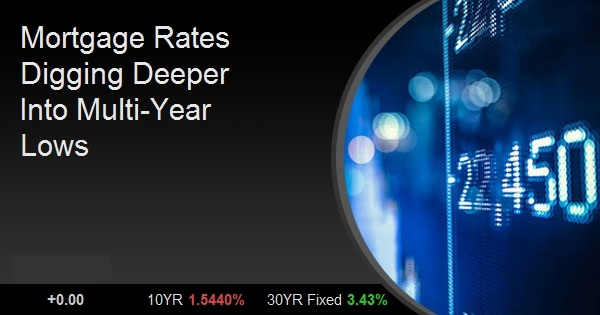 In the world of interest rates, it's good to be a mortgage today.  The dominant species on that world is US Treasuries: the quintessential dollar-based loans (after all, they are loans to the US government).  Loaning dollars to the entity responsible for the dollar is about as foundational as it gets, but I digress.

Treasuries and mortgage rates tend to move in the same direction and by generally similar amounts. That's because mortgage rates are based on underlying bonds (mortgage-backed securities or "MBS") that are fairly similar to Treasuries in most of the ways investors care about.  The prices of MBS dictate where lenders can and should set their interest rates, but ultimately, it's up to the lender.  If they're flush with business and want to slow things down, they might set rates a bit higher.  The same thing can happen heading into a weekend during times of elevated volatility.

Such was the case on Friday.  Lenders had a nice improvement in MBS to work with.  It allowed them to lower rates a bit more than they actually did.  Now, as the new week begins, Treasury yields and MBS alike are indicating slightly higher rates than Friday, but because lenders played it so safe, they were instead able to offer slightly LOWER rates today.  Simply put, mortgage rates are even deeper into multi-year lows now, even though the bond market is pointing to slightly higher rates versus last Friday.

Bond yields hit a bit of a wall Monday, moving upward from Friday's multi-year lows, amid upbeat economic data and potential progress on a Wuhan virus treatment.  We may not be at the very lowest yields here, but it'd take monumentally horrible news to move rates much lower.  I am locking loans closing within 45 days for all but the most risk craving clients.  - Ted Rood, Senior Originator