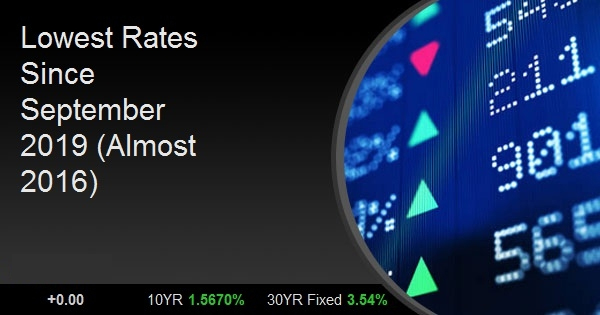 Mortgage rates regained their footing today, moving back to long-term lows after pausing to move slightly higher yesterday.  The definition of "long-term" depends on the lender in question.  Most lenders were offering just slightly better terms in September 2019, but only for a few days.  For several other lenders, you'd have to go back to September 2016 to see anything lower.  Either way, we're talking about the best rates in a long time and a range that's better defined as "mid 3's" than the previously applicable "sub 4%."

Today's improvement coincided with a policy announcement and press conference from the Fed.  These events are widely regarded as capable of motivating big changes in rates, but that's not exactly what's going on here.  In the current case, it's just as accurate to say that rates have been falling for other reasons and had merely circled the wagons to take a break from that movement as they waited to see what the Fed had to say.  When the Fed's message did no harm to the bond market, rates were free to go about their business (of moving back toward long-term lows).

The persistent availability of such low rates depends on a few factors.  The biggest among those at the moment is the evolution of the coronavirus outbreak.  It's definitely been responsible for the quick bump toward this week's low levels, but the trade-off is that rates should experience quick upward pressure as soon as epidemiologists can confirm light at the end of the tunnel.  There are competing theories on when that might be, ranging from only a few days to more than a few weeks.

As soon as virus fears subside rates should go up.  I feel this dip in rates is very temporary so I'm locking everything at application.  - Jason Anker, Loan Officer