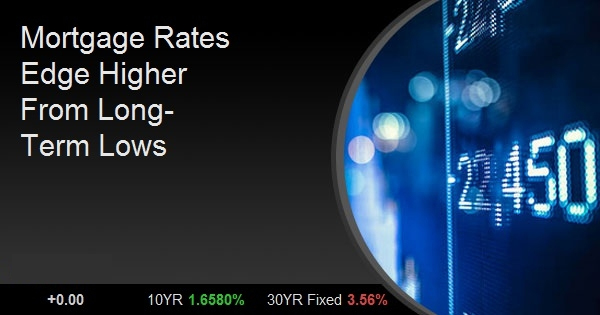 ortgage rates were steady to slightly higher today, leaving the average lender just a hair above the lowest rates in months, and still very close to the lowest rates in more than 3 years. The coronavirus outbreak is still a relevant consideration for financial markets, including interest rates, but traders took today to consolidate their recent positions.

In other words, the recently prevailing trends experienced a bit of a correction.  Stocks rose moderately after falling sharply over the past 2 days.  Treasury yields did the same.  Mortgage rates moved a bit higher in some cases, but because they're not directly tied to Treasuries, they fared better by comparison.  The trade-off was that mortgage rates didn't fall as much as Treasury yields over the past 2 business days.

If the virus situation continues to get worse before it gets better, rates could certainly go even lower.  That's impressive considering the average lender is very close to their lowest rate offerings since the middle of 2016.  But as soon as the fear begins to be replaced by optimism (i.e. containment of the virus becomes a probability), interest rates may snap back quickly to moderately higher levels.