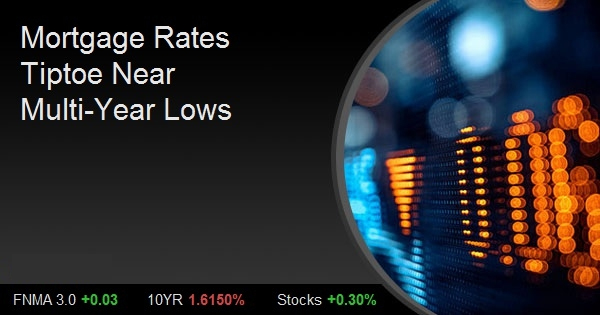 Mortgage rates continued lower to start the week as Wuhan Virus continues to be diagnosed at an exponential rate.   As we discussed last week, interest rates in general should continue to take cues from the spread of the virus.  Why are rates being driven by something that doesn't seem to be at all related to rates?  Simply put, the global financial market is accounting for the impact that a potential epidemic disease could have on the global economy.  A weaker economy generally promotes lower stock prices and lower bond yields (aka rates).

This raises risks and opportunities for prospective mortgage borrowers.  If the virus situation continues to get worse before it gets better, rates could certainly go even lower.  That's impressive considering the average lender is very close to their lowest rate offerings since the middle of 2016.  But as soon as the fear begins to be replaced by optimism (i.e. containment of the virus becomes a probability), interest rates may snap back quickly to moderately higher levels.