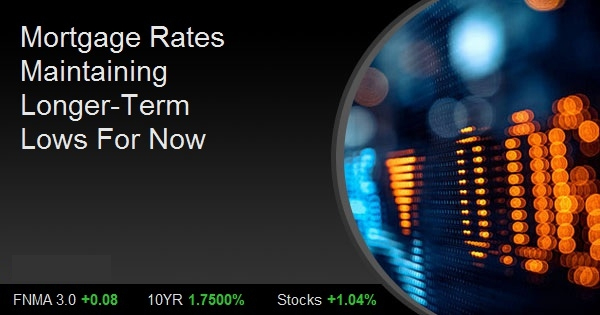 Mortgage rates remained in line with 3-month lows today for the average lender.  Several lenders offered marginally better terms compared to yesterday, but in those cases, the only changes were to the upfront costs associated with the same rates quoted yesterday.

It's a pleasant surprise to see rates as low as they are considering several economic reports have been quite strong recently.  In general, stronger economic data tends to put upward pressure on rates.  That was a risk today with today's Existing Home Sales report coming in at the best levels since early 2018.  But econ data isn't the only consideration for the bond market that underlies day-to-day rate movement.

Low inflation, geopolitical tensions, and even concerns over the Coronavirus outbreak are just three of many other factors that are offsetting the occasional strong economic report.  That said, if most economic reports start coming out much stronger than expected, it will be hard for rates to continue at current levels.  Central bank policy at home and abroad will also play a role.  The European Central Bank will be out with a periodic policy update tomorrow and the Fed will follow a week later.

Even if it's not central banks and not economic data that prompts a shift, occasionally rates can move in one direction simply because they've spent enough time moving in the other direction.  With that in mind, the general trend has been toward lower rates for nearly a month now.

Rates are pretty much at 3 month lows, so always a good idea to lock in at the recent lows.  If you can tolerate some risk and maybe a higher rate, and closing in more than 15 days, i would roll dice and float overnight. -Victor Burek, Churchill Mortgage