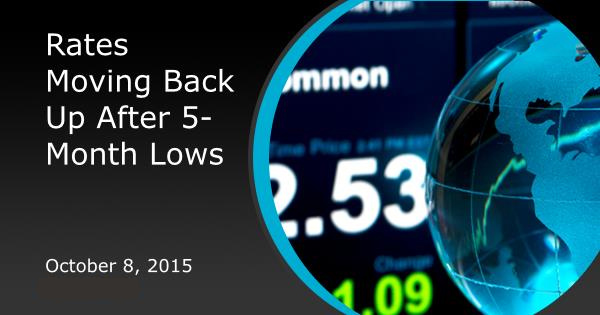 Rates Moving Back Up After 5-Month Lows

The past week has largely been about last Friday’s Nonfarm Payrolls data and the ensuing market reaction. Nonfarm Payrolls—or NFP—is the key component of the Employment Situation, the most important piece of economic data in the US. When the so-called ‘jobs report’ paints a stronger picture of labor markets, interest rates tend to rise while weaker jobs typically results in falling rates.

This time around, rates were already heading lower throughout last week. Even before the jobs data, the average 30yr fixed mortgage rate was in line with its lowest levels in 5 months. That was the culmination of a rate rally that began after the Fed’s most recent policy announcement. By the time the jobs data came out, the momentum toward lower rates was already clearly fading.

The Fed knew the announcement was perceived as overly-cautious and they quickly set about correcting the public’s opinion. Leading up to the jobs report, Fed speakers continually reminded markets that they were a lot closer to raising rates than it seemed. As such, the ebbing rate rally made sense, and investors were braced for the possibility that even a mediocre jobs report could spark an explosive move higher in rates.

This brief, recent history lesson is only important because the jobs data completely shocked markets. It was significantly weaker than expected, and in a way that left no room for “silver linings.” Bond markets had no choice but to rally. When bond prices rally, rates fall. And fall they did… WELL into the lowest levels since April 2015.

Here’s the catch: the improvement only lasted for a few hours before market participants were right back to the business of listening to the Fed explain itself. Again, the more the Fed explained itself, the more it was saying “we’re not really as concerned as it seemed based on that Announcement.” This campaign led to a quick correction that brought rates back in line with their recent range to begin this week.

From there, rates have followed the stock market. It’s not uncommon for stocks and bonds to huddle together in times of increased uncertainty. It’s also not uncommon for bond markets to be keenly aware of key levels in equities markets and to be ready to follow if those levels are broken.

That’s what happened this week. After leveling off through Thursday afternoon, stock averages broke through an important ceiling, causing concern in bond markets that the momentum would continue in that direction. Unfortunately for fans of low interest rates, the direction in question is HIGHER, both for stocks and bond yields (aka “interest rates”).

While the case is far from closed, the current environment is risky enough that it makes sense to favor locking versus floating. Rates could come back down, but  there’s greater risk of a quick move higher versus a quick move lower.

In housing news, last week’s low rates were readily apparent in the skyrocketing Mortgage Applications data. The other side of the coin was the onset of the new TILA-RESPA Integrated Disclosures (TRID) rules, which prompted many buyers to get their apps in before facing the uncertainty associated with the new timeframe requirements.

Stronger-than-expected home price appreciation as noted by CoreLogic, goes hand in hand with data from Fannie Mae suggesting that overall housing sentiment was boosted by the perception of a Sellers' Market.

Keep in mind that bond markets are closed for Columbus Day this coming Monday October 12th. As such, many mortgage lenders will be closed or otherwise not able to process locks.