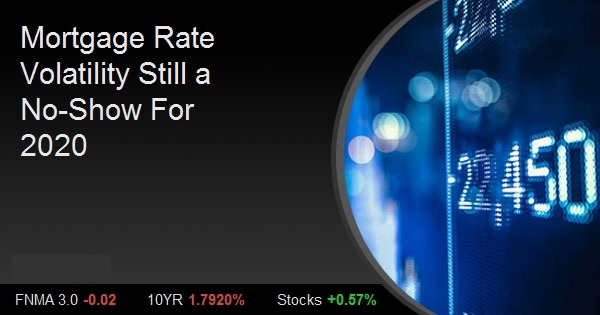 Mortgage rates improved modestly today, adding to yesterday's slightly less compelling improvement.  Taken together, they keep an air of calm and steady progress intact during a week that ran the risk of stumbling across volatility.

One of the key sources of potential volatility was today's signing of the US/China "phase 1" trade deal.  Granted, it was only much of a risk in the event that something unexpected happened.  Needless to say, nothing unexpected happened!  Mortgage rates and the underlying bond market reacted accordingly as they merely went about their business for reasons known only to the traders pushing the buttons behind the scenes (i.e. market movement was so well contained today that we're not able to connect any underlying events with the movement).

All of the above having been said, we're not quite out of the woods with respect to potential volatility.  Tomorrow morning brings the week's most important economic reports.  If they're much stronger than expected, rates could face upward pressure, but weaker data could keep the friendly rate trend intact.  At the moment, the average lender isn't far from their lowest rate offerings of the past 6 months (which are also the lowest in more than 3 years).