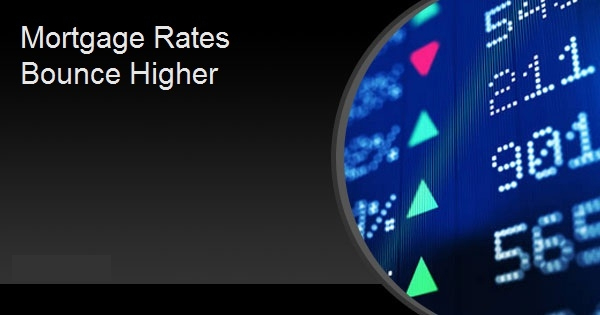 Mortgage rates moved higher more definitively today after as lenders had a chance to match their offerings to underlying bond markets.  Markets themselves were already pointing to this move yesterday, but the lender response was still somewhat mixed in the afternoon hours.

More simply put, mortgage rates are based on the trading levels of mortgage-backed bonds.  The bonds move first and then mortgage lenders follow by adjusting the rates they're offering to consumers.  The adjustment typically happens at least once when the lender publishes rates for the first time on any given day.  From there, markets need to move by a certain amount in order for lenders to realize any benefit to making a mid-day adjustment.  Many lenders did that yesterday, but with trading levels getting even worse before this morning's opening rate sheets (for most lenders) the upward momentum in rates was much more noticeable.

Since we're talking about how the bond market leads the primary mortgage market, it's worth noting that bonds found some support today.  Multiple lenders were able to adjust rates in a friendly direction, but the improvement wasn't quite enough to offset the losses of the past 2 days.

Tomorrow brings the typically important Employment Situation data (aka the "jobs report").  While this data isn't quite as much of a hot button as precedent suggests, it can still have a noticeable impact on rate momentum if it comes out much stronger or weaker than expected.

Bond markets recouped a portion of yesterday's losses Thursday, and many lenders improved their pricing during the afternoon.  If you're considering locking, I'd ask your loan officer if his pricing improved, and, if not, consider waiting until tomorrow AM.   -Ted Rood, Senior Originator

After a weaker opening, bonds have managed to muster some gains and are now in positive territory.    I have only heard of 1 lender repricing for the better.   Tomorrow, we do get the jobs report which can move the markets.  A weaker report might help bonds to improve further, but it is risky to float through this report.   If you lender reprices better today, consider locking.  If your lender does not, i think i would roll the dice and float over night. -Victor Burek, Churchill Mortgage