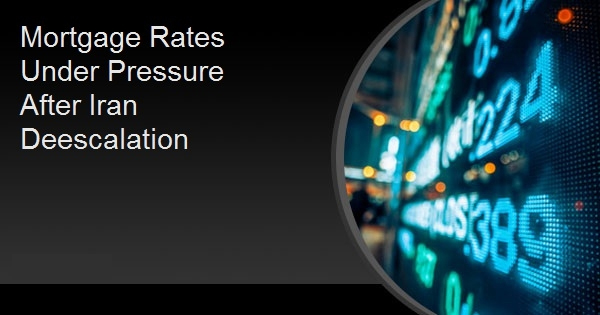 Mortgage rates moved higher today after spending several recent days in line with the lowest levels in more than a month.  Underlying bond markets have been taking their biggest cues from geopolitical developments surrounding US/Iran tensions.  Those came to a head last night after Iran attacked two air bases in Iraq where US troops are stationed.

The average opinion shared on the internet or TV news suggested a likelihood that this meant war.  War would be good for rates and bad for stocks.  Markets reacted accordingly--at least for a few hours.  Things changed when we learned Trump would not address the nation until the morning and that there were no US casualties (seen as the deciding factor in US military retaliation).

In today's speech, Trump effectively deescalated the situation and communications from Iran suggested this was the extent of their retaliation for the recent US attack.  Given that high tensions have been helping rates stay lower than they otherwise would be, the de-escalation is logically pushing back in the other direction.  US Treasuries are experiencing most of the pressure, but some of it is spilling over into the market for mortgage-backed bonds--something that could easily continue tomorrow.  The implication is that mortgage rates should be considered to be facing upward pressure until further notice.

Iranian hostilities appear to be waning today, and bond markets posted moderate losses. My pricing was still close to Tuesday's, so I locked several February closings. For now, it appears rates are more likely to rise than fall. I'll be conservative with my locks until more tariff or international drama surface. -Ted Rood, Senior Originator