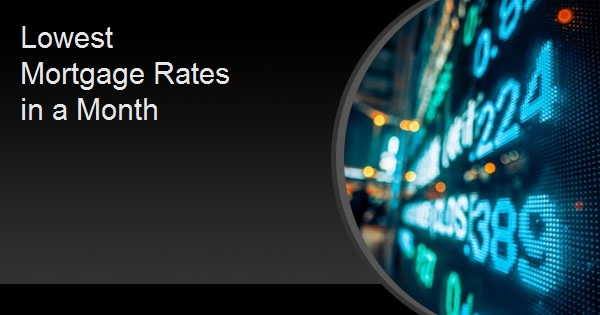 Lowest Mortgage Rates in a Month

Mortgage rates have been on a solid run over the past few weeks--a time that tends to see the chips fall where they may in terms of market movement (especially for rates).  Yesterday and today were really the first two days since December 18th that have seen any semblance of business as usual for rates traders.  Even then, much of the participation was drawn out by geopolitical risks surrounding the flare-up in US/Iran relations after a drone strike killed Iran's top general.

Mortgage rates have been edging lower for nearly 2 weeks and are now at their lowest levels in exactly 1 month.  The gap between the highs and lows during that time isn't huge.  Worst case, rates were 1/8th of a percent higher on December 20th.  Either way, rates are historically low with the average lender under 4% for top tier scenarios the entire time.

Next week will be important as there are several big-ticket economic reports (a key source of inspiration for the bonds that underlie mortgage rates) not to mention the likelihood of additional geopolitical developments.

Bonds posted moderate gains today, amid rising Mideast tensions.  If Iran and US hostilities continue (which appears likely), rates are apt to improve further.  I am in no hurry to lock here. -Ted Rood, Senior Originator

The news from the middle east has brought bonds to 1 month lows.   Unfortunately, I do not see this ending without more trouble which will allow rates to fall further.  I see no reason to lock today.   Float over the weekend to allow time for lenders to pass along the gains. -Victor Burek, Churchill Mortgage