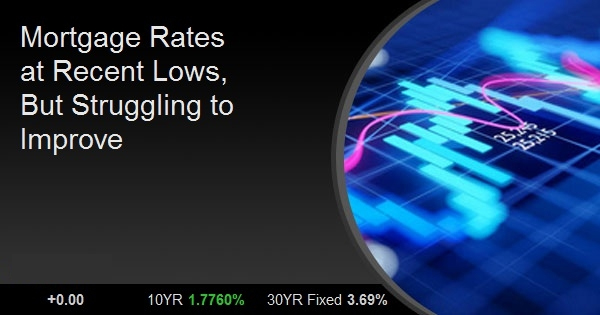 Mortgage Rates at Recent Lows, But Struggling to Improve

Mortgage rates held steady today, keeping them in line with their lowest levels in more than a month.  That's the good news.  There's really not any bad news, per se.  Rates could remain here or even move lower depending on events that will unfold in the coming days and weeks.  But to some, the absence of improvement could be taken as a sign of resistance in the underlying bond market.

The same people seeing that resistance would also be quick to point out that a good amount of the recent move lower in rates owes itself to the flare-up in US/Iran tensions, and that lower rates would rely on tensions remaining or escalating further.  True, that may happen, but if it doesn't, rates would increasingly experience upward pressure as days tick by.

In addition to geopolitics, interest rates will continue to take cues from economic data, among other things.  On that note, there are several important reports due out by the end of the week with Friday bringing the typically important jobs report.

Failure to hold onto today's gains is a bad sign for the short term.  Locking is advised.  -Jason Anker Sr. Loan Officer