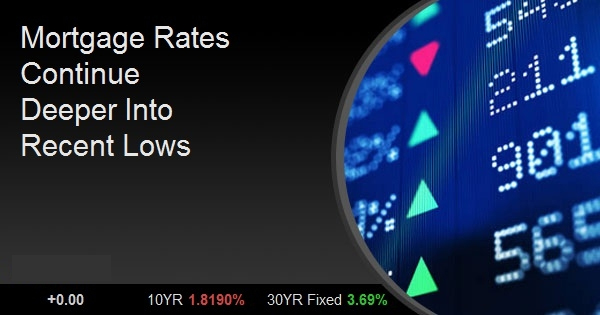 Mortgage rates moved lower again today, bringing them deeper into the lowest levels in more than a month.  There were no specific motivations for the improvement apart from the typical day-to-day changes seen in the underlying bond market.

More simply put, mortgage rates move when bonds move, and the latter can frequently be seen reacting to some development in the news or in response to a specific economic report.   Today, however, bonds showed no clear predisposition to move higher or lower.  That's a good thing considering Friday's movement was largely friendly for rates and that lenders were being somewhat cautious about dropping rates as quickly as the bond market suggested.

Starting tomorrow morning, there will be more data for bonds to digest.  If it's generally weaker than expected or if geopolitical risks continue to flare, rates could continue to improve.  But we could just as easily see upward pressure in the event of stronger data (or de-escalation in US/Iran tensions).

Bond markets mulled further Mideast drama today, advancing slightly through mid-PM trading.  While there hasn't been any Iranian retaliation yet, the chances of further conflict seem high.  I'm in no hurry to lock my February closings yet, let's see where this goes first. -Ted Rood, Senior Originator