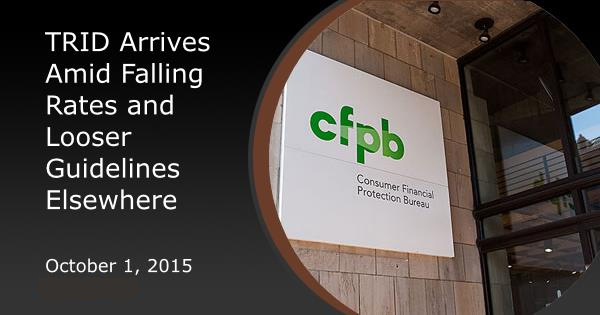 Bond markets continue to defy the consensus for weakness in 2015.  That’s good news for mortgage rates, which are based primarily on mortgage-backed-securities (MBS), a large component of the domestic bond market.   Rates have been doing quite well following the Fed’s latest announcement 2 weeks ago.

With Fed asset purchases well in the past and a rate-hike supposedly on the table, markets have been logical and better-attuned to economic fundamentals.  That’s another way of saying that a weaker economic outlook helps rates and hurts stocks.  (For most of the past 6 years, we’ve seen stocks and bond yields move in opposite directions as the unprecedented monetary easing boosted the prices of both assets).

There’s no question that the global economic outlook is facing uncertainty.  Some of this has to do with the reassessment of Chinese growth and its resulting effect on commodities prices.  But that’s far from the only issue.  Europe continues to struggle with deflation and generally stagnant economic data.  Even in the US, economic data has noticeably leveled-off after a strong run in 2014.

It’s these broad economic considerations that do the most to help rates hold their ground at recent lows.  There is a major supporting player though, and that would be the Fed’s current policy quandary.  It goes something like this:

If the Fed doesn’t hike rates, the global economy should fare better.  But the Fed thinks it’s risky to leave rates where they are for several reasons.  Worst case, the current monetary policy is actually preventing a healthier domestic recovery by creating imbalances in the financial system that favor the wealthy or those who otherwise have the means to benefit from the cheap, short-term borrowing rates.  The Fed is also concerned that the low rates will prevent sufficient bank deposits and thus paradoxically inhibit the normal lending landscape which in turn would force investors to seek riskier returns elsewhere.  Bottom line, they have several reasons to want to raise rates.

But if the Fed DOES hike rates, it introduces an entirely different set of problems.  The domestic economy, in and of itself, probably wouldn’t even notice.  It’s the global economy that’s keeping the Fed up at night now.  Emerging markets operate with lots of dollar-denominated debt.  A Fed rate hike would cause US dollars to become more expensive and increase the debt burden of the very countries we’re counting on to keep the global growth dream alive.   It’s such a prominent issue that the World Bank and the IMF have each asked the Fed to hold off hiking rates for now.

All of this has created a lot of uncertainty about the road ahead, and in general, has HELPED longer term rates.  It’s also made for that stronger stock/bond connection mentioned above.  As stocks plummeted again at the beginning of the week, mortgage rates dropped to their lowest levels since early May, 2015.

Low rates and affordability go hand-in-hand.  Although affordability varies greatly based on location, and although it has generally been trending lower since 2012, low rates have helped it recover somewhat over the past 2 quarters.

In addition to affordability and rates, the regulatory environment is also making its presence felt on the housing market.  This will be a blessing and a curse in the coming days and weeks.  The biggest challenge on everyone’s minds is the roll-out of TRID (The TILA-RESPA Integrated Disclosure rule that goes into effect this weekend).  The industry’s leading trade groups and most mortgage and real-estate companies have offered plenty of education on what TRID entails, but it’s VERY important to remember that TRID will create challenges that training can’t prepare you for.

It’s one thing to simply know what the new timeline requirements are for when a borrower must receive a Loan Estimate or Closing Disclosure.  In fact, you could have completely memorized the CFPB’s handy 91-page ‘plain-language guide,’ but it still can’t prepare you for the reality of lender overlays.

A lender overlay is an additional guideline or policy that a particular lender enforces on top of the universal guidelines imposed by regulatory entities.  In other words, Fannie might allow a borrower to only use one year of self-employment income to qualify, but the lender who’s actually funding the loan might like a little more protection.  With respect to TRID, the CFPB might not require the closing disclosure to be signed, but many lenders will.

It’s these sorts of overlays that all of the broad-scale powerpoints and presentations can’t prepare you for.  The only solution is to simply know ahead of time that there will be delays, confusion, and frustration as the industry endures its courtship with these changes.  Communication is paramount.  Don’t wait to discuss any changes or potential changes with all parties involved in a transaction.  Err on the side of longer lock time frames.  Prep borrowers from day one.  And focus on working with business partners that keep you in the loop and to whom you have no problem extending the same courtesy.