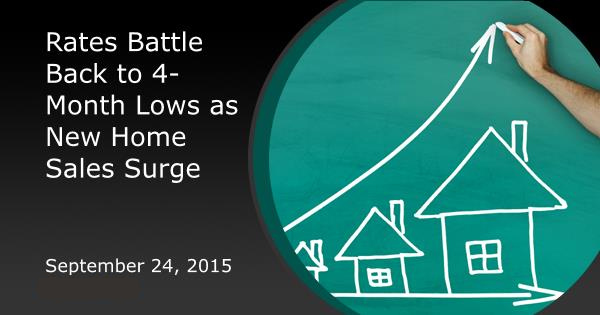 As the new week began, rates bounced sharply back in the other direction, casting doubt on the lasting effects of the Fed Announcement.  There are several very important considerations here.

First of all, if you haven’t already, be sure to separate the notions of Fed rate hikes and mortgage rate increases.  While it’s true the two can go hand in hand over the long run, there are all sorts of circumstances where they actually move in opposite directions.  Last week’s improvement in mortgage rates actually had very little to do with the Fed leaving rates on hold and almost everything to do with WHY the Fed decided to keep rates on hold.  In other words, the Fed’s outlook is a bit gloomy, and gloomy economic outlooks are good for rates.  It just so happened that their gloominess also prevented them from raising the short term rates.

So it was somewhat of a surprise to see rates moving back up after last week’s strong move, but there were several solid explanations.  The clearest reason is also the trickiest to understand.  It has to do with the bond markets that underlie interest rates.   For example, the trading of US Treasuries dictates Treasury yields and the trading of Mortgage-Backed-Securities (MBS) dictates mortgage rates.  These bonds share many similarities and as such, investors tend to treat them similarly in terms of buying and selling demand.

There are many other types of bonds that travel in this pack, or close to it.  One notable example is corporate debt.  These are the bonds issued by big companies to finance operations or acquisitions.  Corporate bonds aren’t quite the same as MBS and Treasuries in investors’ eyes, but big developments in any corner of the bond market tend to flow through to other corners by varying degrees.  With all that in mind, several companies announced big corporate bond deals first thing Monday morning.  Like any supply/demand relationship, excessive supply brings prices lower.  When bond prices move lower, rates rise.

That was the ONLY reason that rates rose as much as they did to start the week.  After markets began working through the new supply, rates began to calm down.  Weaker stock markets also helped. Stock prices and rates don’t always move hand-in-hand, but some investors will sell stocks and buy bonds on days like Tuesday, with heavy stock selling.  By Thursday, rates returned to their best levels in more than 4 months, matching last Friday’s.  Depending on the lender, only one or two days during late August were any better.   Borrowers clearly took advantage of the drop with the Mortgage Bankers Association reporting a strong increase in Mortgage Applications.

The rest of the week has seen similarly good news for housing.  FHFA Home Prices rose more than expected, moving up 0.6 percent in July compared to 0.2 percent in June.  The year-over-year pace of home price appreciation stands at an impressive 5.8 percent.   Despite the rising prices, New Home Sales had their best month since before the Financial Crisis in August.  The annual pace of 552k new homes exceeded analysts’ expectations of 515k.

The only less-than-stellar performance in terms of housing data this week was the moderate drop in Existing Home Sales, which came in at an annual pace 5.31 million versus forecasts of 5.51 million.  The caveat is that the past three months have been the best in more than 8 years, so perhaps a bit of a pull-back was in order anyway. 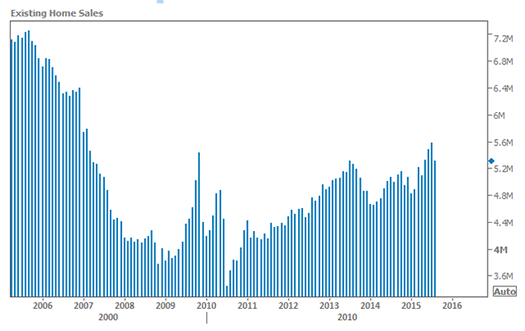 On a final note, if you’ve managed to avoid all of the publicity so far, be aware that some big changes are coming due to the implementation of the new TILA/RESPA Integrated Disclosures Rule, or TRID for short.  These will fundamentally alter some of the time-frames that you may have grown accustomed to over the years.  The changes stand a good chance to cause friction between counterparties who haven’t studied up on the particulars.  The biggest frustration for Realtors will be the varying policies that lenders apply to implement the TRID changes.  Yep… not everyone is handling it the same way.  So it’s a great time for Realtors to get in touch with their mortgage-originating colleagues and find out how their lenders will be applying the changes.  This will help avoid last minute surprises on deals in the near future.