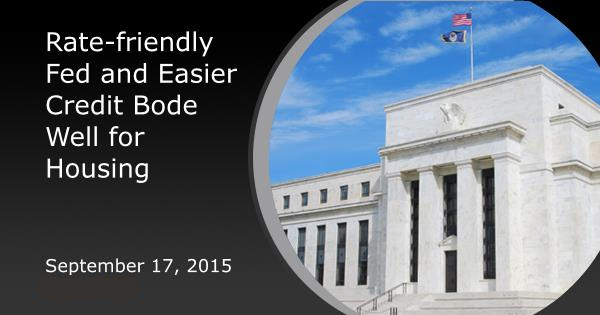 It was nearly impossible to turn on the TV, listen to the radio, use the internet, or interact with other human beings this week without being overwhelmed with the sense that Thursday’s Fed Announcement was a big deal for markets.   After all, this was to be the first Fed meeting in 9 years with even a remote chance of a rate hike.

When we talk about potential changes to the Fed Funds Rate, and the impact on mortgage and housing markets, it’s important to keep in mind that there are distinct differences between longer and shorter term rates.  The Fed’s policy rate is about as short as it gets.  Market sentiment regarding Fed policy is most easily seen in securities like US Treasury Bills and some of the shorter term Notes (i.e. debt that lasts anywhere from weeks to a few years).

Once we get out to debt that lasts 5yrs or more—which includes the typical mortgage—market behavior increasingly changes.  In fact, as recently as 2004, we actually saw longer term rates fall just as the Fed lifted its rate from an extended period of long term lows.  Even though that’s not the norm over the long run, the takeaway is that a Fed rate hike this week didn’t necessarily have to mean destruction for mortgage rates.

As it happens, we didn’t have to find out.  The Fed kept its rate hike aspirations on hold, which was in line with market sentiment, albeit just barely.  Among those calling for the Fed to forego a hike this time around, the common belief was that Fed Chair Yellen would use the press conference (which followed the announcement) to set the stage for  a hike in October or December.   In other words, the consensus was that the Fed wouldn’t hike, but would make it seem more likely in one of the following meetings.

Not only did Yellen avoid making any strong indications about upcoming hikes, markets moved away from the belief as well.   After all was said and done, the odds for a 2015 rate hike were the lowest they’d been apart from a few passing moments at the end of August when global growth fears sent markets into a tailspin.

All of the conjecture, horse-trading, and legitimately big decisions came with a price.  Rates were volatile on the run up to the Fed Announcement.  Investors were a bit more anxious than they thought they would be—especially on Tuesday.  When investors sell their bond holdings, prices fall and rates rise.  Mortgages are part of the bond market and thus were at their highest recent levels ahead of the Fed.  That’s changing rapidly as we head into the weekend.  Post-Fed, much of the week’s damage has been undone as far as lenders’ rate sheets are concerned.  But remember, accounting for volatility is more expensive for lenders than boringly flat rates.  As such most lenders have not yet made it back to last week’s better rate offerings.

Apart from the Fed, it was a big week of mortgage and housing data from Corelogic, with no fewer than 4 separate reports.  These included an early estimate of HMDA’s upcoming mortgage origination data, calling for the 3rd straight year of increased purchase demand, as well as a general overview and analysis of the GSE’s (Fannie Mae and Freddie Mac) affordable housing goals.  On a more quantitative note, and in a similar vein as some of last week’s data, CoreLogic noted that negative equity continues drying up, with only 8.7 percent of mortgaged properties underwater.  But there can be too much of a good thing.  In 14 of the markets leading that resurgence of equity, CoreLogic says prices are now unsustainable.

Unsustainable prices are an unsurprising byproduct of the current environment.  In addition to persistently low rates relative to historical norms, lenders and government agencies (like Freddie Mac, most recently) continue expanding access to mortgage credit.  Several reports reference the phenomenon this week, including Ellie Mae’s Origination Insight Report, and a survey on lender sentiment from Fannie Mae.