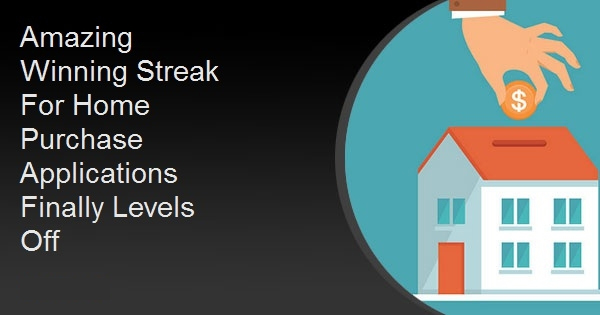 The nine-week string of increases in purchase mortgage applications came to an end last week and refinancing volume pulled back as well. Consequently, the Mortgage Bankers Association's (MBA's) Market Composite Index, a measure of overall application volume during the week ended June 19 dropped significantly, down 8.7 percent on a seasonally adjusted basis. The index was 9.0 percent lower before adjustment.

The Refinance Index dropped 12 percent from the previous week and was 76 percent higher than the same week one year ago. Applications for refinancing represented 61.3 percent of the total compared to 63.2 percent the previous week.

"Mortgage applications decreased 9 percent last week, with both refinance and purchase activity falling despite the 30-year fixed rate mortgage staying at 3.30 percent - the record low in MBA's survey," said Joel Kan, MBA's Associate Vice President of Economic and Industry Forecasting. "Refinance applications dropped to their lowest level in three weeks, but the index remained 76 percent higher than a year ago. Despite the decline last week, MBA still anticipates refinance originations to increase to $1.35 trillion in 2020 - the highest level since 2012."

Added Kan, "Even with high unemployment and economic uncertainty, the purchase market is strong. Activity has climbed above year-ago levels for five straight weeks and was 18 percent higher than a year ago last week. One factor that may potentially crimp growth in the months ahead is that the release of pent-up demand from earlier this spring is clashing with the tight supply of new and existing homes on the market. Additional housing inventory is needed to give buyers more options and to keep home prices from rising too fast."

FHA applications accounted for 11.4 percent of the total, up from 11.0 percent a week earlier and the share of VA applications pulled back 0.5 percentage point to 11.0 percent. The USDA share was unchanged at 0.7 percent.

Both contract and effective interest rates were mixed during the week, but most movements were small. The average contract interest rate for 30-year fixed-rate mortgages (FRM) with conforming loan balances ($510,400 or less) was unchanged at 3.30 percent. Points moved to 0.32 from 0.29 and the effective rate increased.

The average interest rate for jumbo 30-FRM, loans with balances exceeding the conforming limit, decreased to 3.62 percent from 3.67 percent. Points increased to 0.29 from 0.28 and the effective rate was lower.

Thirty-year 30-year FRM backed by the FHA had an average interest rate of 3.35 percent, up from 3.33 percent the prior week. Points dipped to 0.22 from 0.23 and the effective rate increased.

The rate for 5/1 adjustable rate mortgages (ARMs) averaged 3.09 percent, up from 3.07 percent, but points fell to 0.01 from 0.29, pulling the effective rate lower. The ARM share of activity increased to 3.1 percent of total applications from 2.8 percent during the week ended June 12.

MBA also released data from its Forbearance and Call Volume Survey for the week ended June 14. The total number of loans in forbearance declined during the week for the first time since the survey began in March, dropping to 4.2 million from 4.3 million a week earlier. This brought the percentage of all loans in COVID-19 forbearance down from 8.55 percent to 8.48 percent.

The share of loans serviced for Ginnie Mae (FHA and VA loans) remained steady at 11.83 percent of that portfolio, but forbearance plans among those serviced for the GSEs dropped 7 basis points to 6.31 percent, the second decrease in two weeks. The greatest improvement was in the loans serviced for portfolio lenders and private label securities (PLS) which fell by 19 basis points to 9.99 percent. The percentage of loans in forbearance for depository servicers was 9.15 percent, and the percentage of loans in forbearance for independent mortgage bank (IMB) servicers decreased to 8.40 percent.

"The lower share of loans in forbearance was led by declines in GSE and portfolio and PLS loans, as more of those borrowers exited than entered a new forbearance plan," said Mike Fratantoni, MBA's Senior Vice President and Chief Economist. "Fewer homeowners in forbearance underscores the continued improvements in the job market, and provides another sign of the fundamental health of the housing market, which has rebounded considerably over the past several weeks."

Added Fratantoni, "The big unknown with respect to this positive development is the extent to which it relies upon policy measures put in place to help families through this crisis, particularly the stimulus payments and enhanced unemployment insurance benefits that were key parts of the CARES Act. We expect to see further improvements in the weeks ahead given the drop in forbearance requests this week."