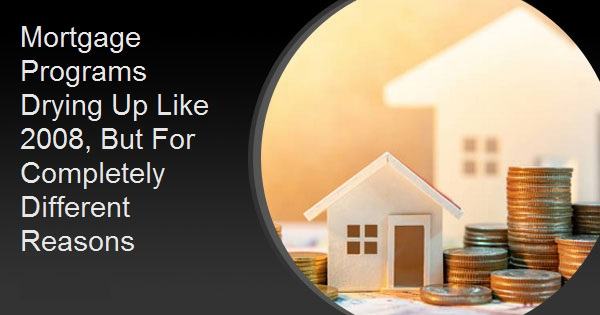 Mortgage Programs Drying Up Like 2008, But For Completely Different Reasons

A paper written for the Joint Center on Housing Studies at Harvard University focuses on the causes and effects of mortgage credit tightening in the current COVID-crisis. The author, Don Layton, is a former CEO of Freddie Mac and a Senior Industry Fellow at the Center.

One of the biggest pandemic-related issues to emerge in housing finance is the availability of credit. Tightening is being discussed as a major problem, perhaps on a par with the last financial crisis. The implication seems to be that much if not all of that tightening is illegitimate, a failure of government policy that could be avoided with the right actions that do not require subsidies for small business or specific industries. Layton questions this view and examines how mortgages are made today and who sets the credit standards.

The complex structure of mortgage financing that has emerged over the last 60 years has three key impacts that are related to and must be taken into account when trying to reduce unnecessary credit tightening. First, strong stress liquidity is due solely to government support. Second, government agencies are now arbiters of acceptable credit, and third, intermediaries have become a major market force. Further, he says only one of these was clearly intended by the original policymakers.

Government's heavy intervention in mortgage financing was originally intended to ensure liquidity in stressed markets. It has employed two mechanisms. The Federal Home Loan Banks (FHLBs) used an implied government guarantee to fund mortgages issued by banks. They went into the pandemic with about $1 trillion in outstanding borrowings (used to finance only a fraction of bank-owned mortgages in the non-stressed pre-crisis markets) and can expand dramatically if needed.

The GSEs (Fannie Mae and Freddie Mac) and FHA/VA both have government support and their mortgage-backed securities (MBAs) trade as near-Treasury quality debt with close to the same ability to access markets. This presumably ensures liquidity will be available to primary-market lenders, even in stressed markets.

The vast majority of mortgage loans sold to the GSEs or insured by FHA/VA are done on a "flow" basis, with loans originated specifically for sale or insurance. This has led to the rise of non-bank lenders who "originate to sell" and lack the capacity to hold loans for more than a short period. Thus government-supported agencies have become, not just providers of stress liquidity but also arbiters of credit terms for the majority of American mortgages.

A regrettable side-effect of this function is to put the agencies in the midst of the perpetual political debate about mortgage credit risk. Layton says left-leaning groups seemingly always believe the credit box is too tight and expensive while those to the right always believe it is the opposite, while both claim to be data-driven.

They, of course, have their own views and economic interests and are always advocating for government policies that maximize their bottom lines: lower interest rates on mortgages, looser credit terms. When the agencies change a policy to benefit borrowers, there is always a question of how much will reach the target rather than being absorbed by the many intermediaries.

Some of these associations are now loudly claiming that government-induced difficulties have caused credit tightness. Therefore, as a matter of fairness, the government should reverse or offset those difficulties, especially ones causing their members' losses.

Layton says there are three major factors that determine the tightness of mortgage credit risk at any point in time: (1) the state of the economy, especially housing markets; (2) the factors that  drive  different types of investors in mortgage credit risk act through the economic cycle; and (3) how being an intermediary between borrowers and mortgage investors can translate into "overlays" that tighten credit.

All else being equal, mortgage credit risk moves with the economic cycle. A loan has lower risk when home prices are rising or unemployment is falling than when the opposite occurs. Thus, to some degree, the current tightening is not a failure of government policy but a reflection of how risk responds to the economy.

The current tightening may seem worse than it is due to how quickly things changed. At the beginning of the year credit was considered somewhat loose, based on record low employment, strong wage growth, and rising home prices. Then the economy turned on a dime with unemployment hitting 14.7 percent by April. Home prices however continue to rise at about 5 percent. Based on both factors, mortgage terms probably should be a bit tight, but not overly so, for mainstream borrowers. However, given the precipitous prices declines in 2008, one can understand an investor bias towards greater tightening, especial for marginal borrowers.

In 2008, the financial system was itself in massive distress, and its capacity to extend credit for mortgages dramatically declined. However, in 2020, banks are healthy, the agency MBS markets (with the help of the Federal Reserve re-establishing trading liquidity) are absorbing record new issue volumes, and even private mortgage insurance firms (PMI) are continuing to operate relatively routinely. The sole exception is the private label securities (PLS) market, which has mostly evaporated.

Layton says that so far, because the economic downturn is mainly hitting employment rather than home prices, and with the relative health of the banking and financial systems, mortgage credit tightening has taken the form of a targeted withdrawal from riskier borrowers and products. This is ultimately less damaging to the economy than the mass credit tightening in 2008 and the two eras should not be confused.

Each category of mortgage investors has structural requirements that make them more or less or not at all procyclical. Private-sector investors are clearly procyclical, government-supported ones are not.

Banks, which make up about 25 percent of the market, must be good stewards of their stockholders' capital through quality risk management risk adverse credit decisions. This seems to be happening. For example, JP Morgan and Wells Fargo reacted to the pandemic by suspending HELOC originations. Thousands of banks will make their own decisions taking more and less severe steps and driving the market. Local banking supervisors will also require them to tighten up on all types of credit.

PLS has a tiny share (5 percent) of the mortgage finance system, but their loans are very visible, concentrated in either high-risk non-QM mortgages or "jumbo" loans. Because there is no obvious balance sheet to act as a shock absorber when the investors in PLS securitizations flee, and they have, this is the most procyclical portion of the mortgage market. Its extreme credit tightening can leave the impression it represents more than its small and high-risk portion of the market.

FHA and the VA, with a 20 percent market share, have no shareholders or profit expectations and have been used in the past to achieve government policy objections. In the Great Recession their market share more than doubled to 20 percent to help fill the hole in origination capacity. Layton said so far there is no indication of an "instant replay" of that countercyclical role and neither agency has loosened or tightened its credit box.

The charters of the two GSEs were designed ensure they would provide liquidity to primary lenders, but it does not require them to broadly underprice risk or assume inordinately risky mortgages. They are really hybrids of for-profit companies and government agencies sometimes used for policy purposes but can't always be both at once.

Like the FHA/VA, they have neither tightened their credit box (like a private-sector, shareholder-owned company would) nor loosened it (as a government agency might). As they have in the past, they are using their giant monoline balance sheets and quasi-utility status to be resistant to pressures to tighten and loosen mortgage credit as the economic cycle goes up and down.

There can essentially be no high-LTV lending unless PMI firms accept such loans which is required on about 20 percent of GSE mortgages. There are already reports that they, as shareholder-owned firms, have tightened their credit criteria and raised prices so the GSEs have effectively had their criteria for high LTV lending tightened up for them. This makes them appear procyclical to a modest degree for borrowers with higher risk.

Based upon late May/early June secondary trading, CRT markets are pricing the current flow of GSE mortgages about 20 to 30 basis points higher than before the pandemic. However, with giant balance sheets to handle risk, the GSEs are not pricing new loans based upon marginal CRT costs but are absorbing their ups and downs, reflecting the resulting average cost versus the average G-fee generated by their entire mortgage portfolio. This allows the GSEs to avoid being significantly procyclical, in contrast to banks and PMI firms.

The mortgage intermediaries or loan originators currently sit astride the 70 percent of mortgages that go from primary market lenders to MBS markets. At each step of the mortgage origination process, as a loans passes through the hands of a particular intermediary, that entity has potential risks and costs. In stable economies, they simply pass the credit terms of the GSEs and FHA/VA through to potential borrowers. However, in unsettled times, they add their own tighter terms or "overlays. Layton deals with the current use of overlays, especially those associated with the Congressionally mandated forbearance plans in a special report. We will summarize this report separately.

Layton concludes that mortgage credit tightening is real, but more targeted and less impactful than indicated by some of the industry lobbying and more sensationalist reporting on the issue. It is also quite different from what happened in 2008 to 2011 as there has been no collapse of mortgage capacity.

This time the challenge appears related to the ability to refinance at modestly lower rates, and possibly cashing out built-up equity. Still, with the industry currently processing record volumes of new mortgages, especially refinancing while seemingly enjoying record origination profits, one can assume that  credit tightening has not stop the clear majority of borrowers from refinancing, only the most marginal ones have been impacted. Again, this issue is clearly a targeted one, with little resemblance to the 2008 to 2011 era.

The private sector has tightened up on credit in a rational and expected manner as well. It has reacted to the economic reality that risk is higher than before, leading to banks making loans for their own portfolios, including assets like HELOCs that have no connection to the CARES Act forbearance requirement or what the government agencies will or will not purchase on what terms. It has led to the PLS market, as expected, mostly evaporating, impacting riskier loan products and a very small percentage of the market, and to the PMIs raising prices and toughening credit terms, modestly, on the high-LTV loans they support for the GSEs.

The net result is more marginal credits are becoming unacceptable, while the vast majority of those seeking to refinance, for example, still seem to get approved. This is not a situation in which the government should attempt to somehow undo this natural and reasonable private-sector tightening.

Third, as far as can be determined, the four government guarantors have not tightened up their credit boxes, meaning they are already doing a lot to support the economy. Neither has the government deployed FHA and VA to be countercyclical as this would not address the main problem, marginal credits unable to refinance. That the GSEs, as profit-making companies, have not tightened credit as the banks have is a significant policy benefit to the homeowning public.

Fourth, the core issue of credit overlays by intermediaries has many causes, including the industry already processing record volumes, before one gets to what is possibly the biggest source: how the forbearance program, designed for existing loans, is applied to in-transit and newly made mortgages. More on this subject later.