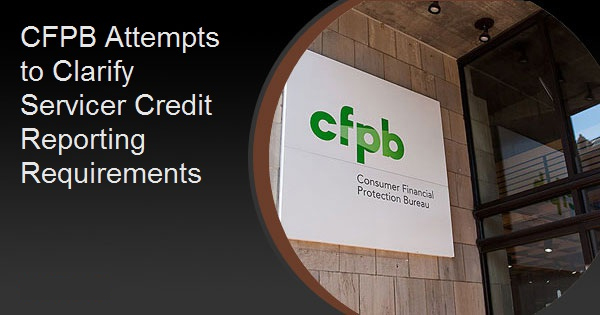 There has apparently been considerable confusion regarding servicer obligations to report to credit agencies regarding loans in forbearance. The original guidance issued to servicers by the GSEs Fannie Mae and Freddie Mac in mid-March regarding the COVID-19 emergency instructed them "to suspend reporting the status of a mortgage loan to credit bureaus during an active forbearance plan, or a repayment plan or Trial Period Plan where the borrower is making the required payments as agreed, even though payments are past due, as long as the delinquency is related to a hardship resulting from COVID-19."

That guidance was countermanded by provisions in the Coronavirus Aid, Relief, and Economic Security  or ''CARES Act'' passed by Congress later that month. Section 4021 of the Act modifies parts of the Fair Credit Reporting Act (FCRA).

The Consumer Financial Protection Bureau (CFPB) attempted to clarify how it would be enforcing the credit reporting requirements during the emergency in a FAQ statement this week. The Bureau stated that it "expects furnishers to comply with the CARES Act." Fannie Mae offers a similar clarification to its original guidance in its Lender Letter 2020-02 as most recently updated on June 10. Neither, however, explain what those CARES Act requirements are.

The CARES Act makes the following changes to FCRA. It defines the term "accommodation" as an agreement to defer one or more payments, make a partial payment, forbear any delinquencies, modify a loan, or grant any other relief or assistance during the period beginning January 31, 2020 and ending either 120 days after the CARES Act was passed (on March 27) or 120 days after the COVID-19 national emergency is terminated, whichever is later.

Under that accommodation as defined above, the "furnisher" (the servicer in this case) must report an account as current, whether or not the consumer makes the payments. However, if the account was delinquent prior to the forbearance it should continue to be reported as such. If a delinquent account is brought current during the forbearance period, then it should be reported as such. These instructions do not apply to loans that have been "charged off."

As nearly as we can tell, the only change from the pre-CARES Act guidance by the GSEs, is that reporting is frozen in time. If a loan was current prior to forbearance it continues to be reported as such. However, a previously delinquent loan does not become current by virtue of entering a plan.